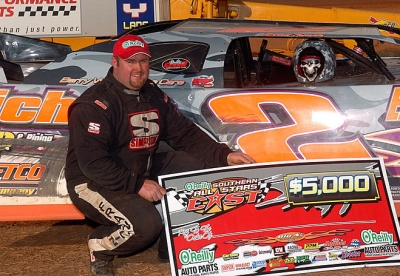 TRAVELERS REST, S.C. (March 22) — Dennis Franklin of Gaffney, S.C., wrapped up a lucrative spring weekend with a $5,000 victory in the Icebreaker 40 at Travelers Rest Speedway. Franklin fought off challenges from Jonathan Davenport of Blairsville, Ga., and Randy Weaver of Crossville, Tenn., to capture the second event on the O'Reilly Southern All Star East tour. | Slideshow

Davenport was second with Weaver, Ricky Weeks of Rutherfordton, N.C., and Casey Roberts of Toccoa, Ga., rounding out the top five in the daytime event.

Correction: An earlier version of this story reported this was the series opener; it was the second series race.