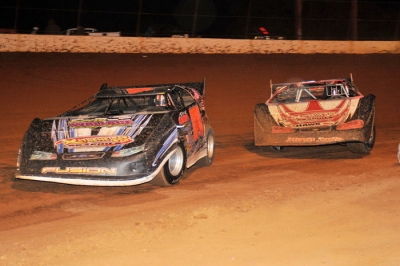 MERIDIAN, Miss. (March 21) — Jason Cliburn of Star, Miss., had three firsts Saturday at Whynot Motorsports Park. He finished first, got his first win at the track, and got his first victory on the Mississippi State Championship Challenge.

"We've run good at this track over the years," the winner said. "It feels good to finally get a win here."

Cliburn started fourth, but he wasted no time in getting to the front. Justin McRee of Woodstock, Ala., started outside the front row and led the first lap before giving way to polesitter David Ashley of Zachary, La. But Cliburn took command on the fourth lap and led the rest of the 50-lap main event for a $2,500 payday at the quarter-mile oval.

Cliburn had a scare with 10 laps remaining when Ashley, the two-time and reigning MSCC champion, was able to slip past. But a caution negated Ashley's move, and Cliburn stayed in control the rest of the way. Ashley was second followed by 16th-starting Jay Blair of Angie, La., Steve Bryan of Collinsville, Miss., was fourth and Chris McElhenney of Decatur, Miss., rounded out the top five.

Notes: The winner's Ford-powered GRT Race Car is sponsored by Cliburn Tank Lines, X-treme Graphics and Larry Wallace Racing Engines. ... Cliburn is the second first-timer winner on the series in 2009; Chad Thrash won March 7 at South Mississippi Speedway for his first series victory. ... David Ashley leads MSCC points. ... Among drivers failing to make the feature: Marlon Wild, Kennith Crowe, Mike Boland, Wiley Williams, Scott Dedwylder and Keith Miller. ... The series skip April before running seven events in May, starting with a May 2 event at Greenville (Miss.) Speedway. ... The next MSCC event at Whynot is scheduled for May 30.