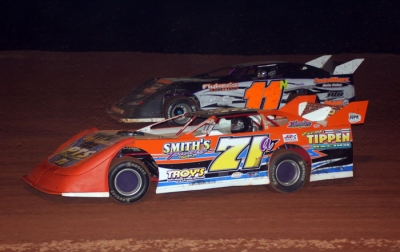 Chanler took advantage of his pole position to grab the lead at the outset of the 40-lapper and quickly distanced himself from the field. As the surface slickened, several caution flags waved in the opening laps and drivers found what little traction was remaining in the bottom groove.

As Chanler fought lapped traffic, Tippen closed the gap with a spirited battle developing up front. On a lap-26 restart, Tippen shot under Chanler and took control of the race. Cummings caught the frontrunners in the race's late stages, but Tippen held on for his first series victory since Oct. 7, 2006, at I-30 Speedway in Little Rock, Ark.

Notes: Tippen's GRT Race Car is sponsored by Smith's Towing and Troy Tippen Racing. ... Tippen has six career SUPR victories, including four in 2006. ... After winning the consolation race, three-time SUPR champion Doug Ingalls of Longview, Texas, rallied from 17th to finish eighth. .... Kevin Weaver of Gibson City, Ill., making a rare series start in a Ricky Jowers-owned car, finished 11th. ... Local favorite Jody Prince endured a frustrating night after being caught up in a heat-race accident. He transferred through the consolation but was 13th in the main event. ... Next up for O’Reilly SUPR competitors is a March 28-29 weekend with Saturday night action at Pike County Speedway in Magnolia, Miss., and Sunday afternoon action at Baton Rouge Raceway in Baker, La.