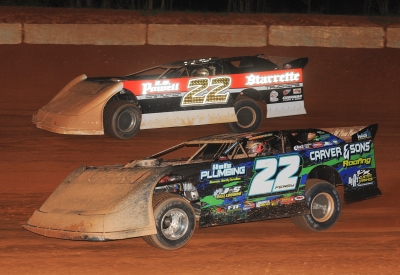 GASTONIA, N.C. (March 20) — Rebounding from a flat tire, Chris Ferguson of Mount Holly, N.C., rallied back to the front at Carolina Speedway to capture the ninth annual Skyler Trull Memorial. The 19-year-old Ferguson pocketed a career-high $5,000 for his first career victory on the Carolina Clash Super Late Model Series, which opened its season after rain pushed the event back one week. | Video recap

“This is an awesome win for us," said Ferguson, who shed tears in victory lane along with family members. "This is just a very special race for me and my family and to win it means more than I can put into words. Carolina is really our home track and this place was my grandfather’s favorite track. So this win is just so special in so many different ways."

Ferguson, who started outside the front row and ran behind polesitter Dennis Franklin early, worked his way back toward the front in the caution-plagued 50-lapper after replacing his flat tire, eventually taking the lead from Randle Chupp of Troutman, N.C., and holding on the rest of the way.

“When I got to the top five I made up my mind I was getting back to the lead. We were able to get to third pretty quick," said Ferguson, the night's fast qualifier. "And I caught G.R. (Smith) and got by him and that caution came out. I said to myself, 'This is my chance to get the lead.' We were catching Randle when the caution came out, so I felt like we going to be able to race him for the lead when we got back to green. That was a tough race. All those cautions at the end, I didn’t think we were ever going to get through it."

Frankie Beard of Toccoa, Ga., finished second in the attrition-riddled event while Johnny Pursley of Clover, S.C., was third. Dan Breuer of Mooresville, N.C., and Justin Labonte of Trinity, N.C., rounded out the top five. Chupp was among the race's many dropouts, finishing 11th. Franklin was 22nd in the 24-car field.

Notes: Among Ferguson's sponsors are Carver and Sons Roofing, Firestone Building Products, Hal’s Plumbing, Max Baxter Roofing and Clements Race Engines. ... Ferguson also thanked his father, who serves as the team's crew chief, and long-time supporter Jim Carver. ... The most recent first-time series winner, Tim Allen of Kannapolis, N.C., also got his maiden victory at the same track last June. ... Ferguson lowered the track record in qualifying and donated his $250 fast qualifier bonus to the Make-A-Wish Foundation, which is benefitted by the annual event. ... The Skyler Trull Memorial pays tribute to the late daughter of Larry Trull and the granddaughter of Lowry and Pat Trull, who organized the event that has donated more than $35,000. ... Drivers failing to crack the feature lineup: Josh Richardson, Furman Parton, Jay Sessoms, Travis Pennington, Craig Shuffield and eight-time NCRA champion Larry McDaniels. ... The Carolina Clash moves to Lancaster (S.C.) Motor Speedway for a Saturday night event paying $5,000 to the winner.