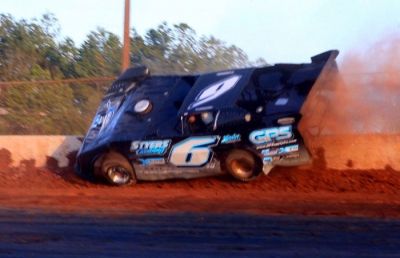 The 25-year-old Davenport, of Blairsville, Ga., led all 60 laps at Cherokee Speedway to win the March Madness main event, the first race of the season on the O'Reilly Southern All Star Series. Davenport fought off challenges from drivers including Chris Madden of Gray Court, S.C., and Clint Smith of Senoia, Ga., for the $10,000 triumph at the 4/10-mile upstate oval.

While Davenport took the checkered flag first, his race ended with a thud as his No. 6 slammed the turn-one wall and rode the concrete following his victory as he tried to avoid lapped cars. He posed with the damaged car in victory lane.

“My car was just so good," Davenport said. "I hate what happened after the flagstand there. Kevin and Lee Roy have given me such a great opportunity to drive their cars. I am glad we are in victory lane, but I sure hate they had to tow the car into it."

Smith finished second with Dale McDowell of Rossville, Ga., third. Freddy Smith, the race's PPM Racing Products Hard Charger, was fourth and last year's winner Jimmy Owens of Newport, Tenn., rounded out the top five. Madden ended up eighth; he fell from contention with a turn-four spin as he tried to overtake Davenport.

Notes: The winning Rocket Chassis is sponsored by Styer's Curbing, General Plumbing Supply and Xceldyne. ... The victory was Davenport's second of the weekend. He also earned $10,000 in Crate Late Model competition the previous evening in Modoc (S.C.) Speedway's Fastrak-sanctioned Modoc 100. ... Davenport notched his first career victory at Cherokee and first-ever on the SAS East tour. ... The event drew 27 drivers from 10 states. ... Drivers failing to make the feature: Billy Thompson, Michael Akeson and Zach Cox. .... The next SAS East event is a $5,000-to-win race March 15 at Travelers Rest (S.C.) Speedway.