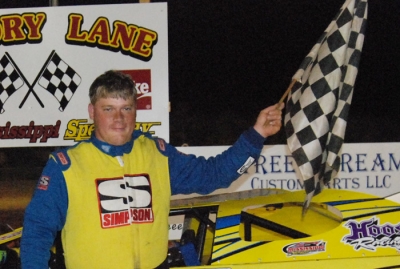 PASS CHRISTIAN, Miss. (March 7) — Chad Thrash of Meridian, Miss., led all the way in the Frostbite 50 at South Mississippi Speedway to notch his first career victory on the Mississippi State Championship Challenge. Thrash earned $3,000 while holding off late challenges by Chris Wall of Holden, La., who captured the previous night's weekend opener at the quarter-mile oval on the Gulf Coast. | Thrash determined to prove victory isn't a fluke | Video bonus coverage

Thrash started outside the front row, got a jump on polesitter Bub McCool of Vicksburg, Miss., and maintained control the whole way. Wall, who started eighth after a spin in the dash race that set the first four rows of the feature, picked his way to the front from his eighth starting spot and got up to second in the race's late stages.

But Thrash completed his victory over Wall with McCool finishing third. Neil Baggett of Shannon, Miss., was fourth and two-time and reigning series champion David Ashley was fifth.