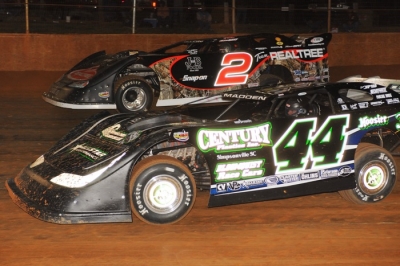 CHATSWORTH, Ga. (March 7) — Former two-time series champion Chris Madden of Gray Court, S.C., overtook front-row starter Ty Dillon of Lewisville, N.C., on the 18th lap at North Georgia Speedway's Ernest Young Memorial and led the remainder of the O'Reilly Southern All Star 50-lapper for a $5,000 payday. Madden, who started fourth in the 24-car field, crossed the finish line ahead of 12th-starting Randy Weaver of Crossville, Tenn., who rallied after winning a consolation race. Third-starting Jimmy Owens of Newport, Tenn., was third while Brandon Kinzer of Allen, Ky., and the 17-year-old Dillon rounded out the top five at the third-mile oval. | Slideshow

Polesitter Dale McDowell of Rossville, Ga., the fastest qualifier among 41 entrants in the fourth SAS event of the season, spun by himself on the second lap to hand the lead to Dillon. McDowell went to the taili and ended up 11th. Besides McDowell's spin, among other yellow flags were on the fourth lap for a spin by Skip Arp, for Todd Morrow on the 27th lap and for Tommy Kerr's late-race spin.

“I had a great car tonight," Madden said. "We finally made the right choice on tires here. We have finished second the last few times we have been here because we went the wrong way on tires."