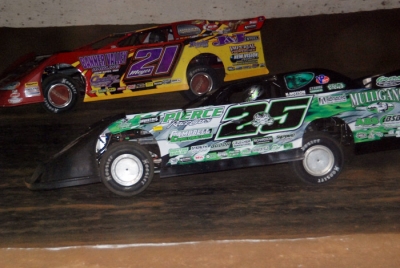 The Highside Hustler jumped into the tricky top groove from the outset, blazed past Shannon Babb and then Billy Moyer, and survived a few scrapes with the wall and a few jumps over the cushion for a 40-lap victory paying a career-high $7,500 at the 3/8-mile oval in western Kentucky. | Saturday slideshow | Van Wormer wins March Madness opener

"I just thought the top was going to be (good)," said the 30-year-old Bloomington, Ill., driver, who overtook Moyer on the 15th lap and led the rest of the way. "The guys would have to slow down more getting through the middle, especially with a few holes down in turn three getting in, and I thought I'd be able to get around the top that much faster, and carry much more speed. It worked."

Babb, of Moweaqua, Ill., challenged Feger a few times in the race's late stages before settling for second while Ray Cook of Brasstown, N.C., was third in the UMP DIRTcar-sanctioned event. Frank Heckenast Jr. of Orland Park, Ill., was fourth and Jeep Van Wormer of Pinconning, Mich., Friday's $5,000 winner, rounded out the top five. Moyer started on the pole and led the first 14 laps, but he broke an engine while running third on the 34th lap.

Feger's throttle-stomping impressed everyone, including chassis builder and former Hall of Fame driver Bob Pierce, who was among many supporters congratulating Feger in victory lane. When someone said Feger looked like the Tall Cool One of old, citing Pierce's nickname, the former racer brushed off the compliment. "I could never run that high," he said with a big smile.

Feger's foes, too, were impressed that he made the high groove into the winning groove with his fifth-to-first run in the first 15 laps.

"He definitely found that top before everybody did. He definitely drove by us on the top there. It was good for him," said Babb, who started outside the front row and kept an eye on some of Feger's near-disastrous laps the second half of the feature. "When you do drive like that — I've done that 100 times — you can't run every lap that good, but you can always make a good roll, but you never know when you're going to mess up. He didn't ever mess up. ... He had her cooking really good. I was happy for him."

The third-starting Cook thought the high groove had potential, but he was leery of running up there early in the race after his car became airborne when he hit a high-groove hole exiting turn four. "But he was the only one who took the chance on going up there early, and it paid off for him," Cook said.

The 20-year-old Heckenast, who started fourth, found his car running better down low and couldn't keep up with the winner. "I saw him when he went by me. He was putting a show on," Heckenast said. "I was underneath Ray Cook and (Feger) split both of us like we weren't there. He was doing a helluva job."

Feger, who battled last June for a UMP DIRTcar Summernationals victory before high-side miscues contributed to his demise, was glad it all worked out this time around as he brought a new car to KLMS, grabbing a victory and a sixth-place finish in Friday's opener.

"I knew my car was good there at the beginning, but I didn't know how good," Feger said. "I was able to hook that cushion a couple of times and they put me on the outside for that first restart, and it just stuck and I knew it was good. I was just trying to be patient and bide my time and take what I could get, but still take the holes when I could get 'em. Everything just worked out real good.

The race was slowed by four cautions, none for serious incidents. Steve Francis spun on the second lap and was towed off the track. Jeff Larson got into the backstretch wall on lap 17. Brent Kreke spun in turn four on the 19th lap and on the restart, Jason Riggs spun between turns three and four for the final yellow.

For Feger, it was a thrill to take the lead from a Hall of Famer in Moyer, and to outduel Babb, one of his racing heroes, in front of Pierce, another hero.

"Just to be able to run door-to-door with them guys and beat 'em here, and have a little bit of luck go my way here," Feger said. "I'm so glad Bob was here to see it. It just means a lot to me, and all my guys who've worked so hard."

Notes: Feger's Pierce Race Car is sponsored by Advanced Racing Suspensions, Absolute Apparel, Mulligans, Campbell Construction, ABS, La Bamba and Crutcher Mfg. ... The victory was the richest by a Pierce car. ... An off-grounds power outage and the resulting repairs dimmed the track's lights, delaying action for about a half-hour before time trials. ... In the first consolation, Michael Kloos spun in turn three while battling for a transfer spot and triggered a melee that caught up several drivers, including Friday's third-place finisher Will Vaught. ... In the first heat, Jeep Van Wormer and Jason Feger did some fending-banging on back-to-back laps while swapping slide jobs. ... Terry English, driving the Bob Harris-owned Warrior No. B1, had a rare miscue in qualifying, spinning in turn four. ... Newcoming drivers for Saturday were Jeff Beyers of Pana, Ill., Josh Throgmorton of Providence, Ky., and Billy Faust of Lebanon, Ill. ... Drivers on hand Friday who didn't return Saturday were Mike Hammerle of St. Charles, Mo., and Jeff Walston of Paducah, Ky.