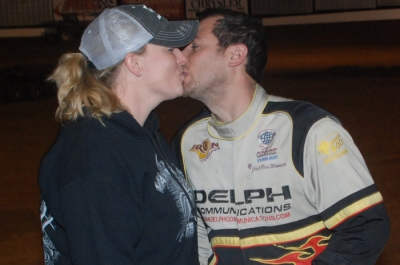 Racing at the track where he first drove a Late Model 10 years ago, Van Wormer notched his first victory in the Rocket Chassis brand that he switched to for the 2009 season.

"This car is amazing, oh my gosh. I've never been able to drive in that hard before, you'd just stick and exit the turn. It was phenomenal," Van Wormer said. "I lapped traffic, the harder I drove it in, the better it went. I was like 'Wow!' I'm just tickled to death.

"Hopefully we can do it tomorrow and have another perfect night," Van Wormer said, looking ahead to the 40-lap, $7,500-to-win UMP DIRTcar independent event scheduled for Saturday at the 3/8-mile western Kentucky oval.

Van Wormer got the jump on fellow front-row starter Will Vaught of Crane, Mo., and pulled away through the first half of the race. By the time third-starting Billy Moyer of Batesville, Ark., worked past Vaught on the 16th lap, Van Wormer held nearly a straightaway lead.

Moyer cut that margin down to about a half-straightaway when a late caution appeared for fifth-running Ray Cook's flat right-rear tire, setting up a three-lap dash to the checkers. Van Wormer smoothly edged away from Moyer in the final laps for the victory while Vaught was third ahead of Steve Francis of Ashland, Ky., who drove the Tim Logan Motorsports No. 11 from 13th to fourth. Steve Casebolt of Richmond, Ind., advanced three position to finish fifth on a balmy, late-winter evening with temperatures in the 60s.

Van Wormer, who had driven MasterSbilt Race Cars in recent years, had so-so results in his Rocket debut last month during Florida Speedweeks, so he was glad to get confirmation that his chassis switch was a good move. Not that it's easy when dealing with relatively unfamiliar equipment.

"We made some changes on the car. I was a little leery about making changes because (Shannon) Babb came out and ran that consy and ran better (on the clock) than we did in the heat race," Van Wormer said. "So I was like, 'Do I tighten my car up? And how much?' I talked to (Rocket house car driver) Josh (Richards) on the phone and he told me what he thought, and we did exactly that."

Van Wormer couldn't have been happier with the car in building a healthy lead while working lapped traffic most of the way. But Van Wormer was a little antsy when a caution appeared with just three laps remaining and he could see Moyer's No. 21 on the scoreboard in the second position.

"Moyer doesn't make mistakes, and I was worried about making a mistake or messing up a little bit," the winner said. "But when I went through the corner and cornered really well, and I came around and my guy said I had a couple of car lengths lead on him again, I was like, 'That's good, that's good, I can probably hold him off now.' It was a perfect night."

Although Moyer gained ground on Van Wormer from laps 16-27, he struggled in dealing with the crumbs on the track left in the leader's wake.

"He was a little better than we were," Moyer said. "I maybe could've had a chance, but I hit that hole in (turn) three and lost the front end with like two (laps) to go, and let him get four or five car lengths on me. You're not going to make that up for sure."

Vaught, making his first 2009 start, was right on Moyer's tail at the finish in coming home third. He was second-guessing his choice of a too-soft right-front spring that didn't keep his car balanced in turn three.

"I got beside Jeep there and it bottomed out and cost me the race, I thought. You live and learn," the 22-year-old said. "We learned a lot tonight and I think we apply it tomorrow night, and hopefully we can pull it off. I think we were one spring away from, hopefully, winning."

Notes: Van Wormer's Rocket has a Cornett Thunder engine and sponsorship from Globe Technologies, Bayline Fire Protection and Port City Racing. ... Van Wormer is flying to Australia next week to compete in the Australian Late Model Nationals on March 13-14 at Perth Motorplex driving a borrowed car. ... Ray Cook of Brasstown, N.C., who started fourth and was running fifth when a flat knocked him from contention, suffered his first defeat in the MasterSbilt house car he drove; he has three 2009 victories. ... Sixth-finishing Jason Feger of Bloomington, Ill., started fifth but slipped back a few spots early. He recovered and was up to fourth at the late-race caution, but a deflating right rear tire cost him two spots on the restart. ... Former track champion Terry English of nearby Benton, Ky., drove a Bob Harris-owned No. B1 instead of his usual No. 96. English also drove for the Shelbyville, Tenn., car owner during Florida Speedweeks. ... Don O'Neal of Martinsville, Ind., who finished 12th, drove Chad Stapleton's No. 32 Rocket Chassis. O'Neal was a teammate to Greg Johnson (now of Mitchell, Ind.), who was 17th in a Rayburn. ... Billy Drake of Bloomington, Ill., who dissolved his self-owned team in the off-season, started the Gary Gerstner-owned No. 6 normally driven by Michael Kloos. He was the race's first dropout. ... Behind the microphone in the KLMS announcers' booth was James Essex of the Lucas Oil Late Model Dirt Series and Jefra Bland, younger sister of driver Jordan Bland of Campbellsville, Ky. Bland also handled the postrace interviews on the frontstretch. ... Among drivers failing to make the feature were Kevin Claycomb of Vincennes, Ind., who was running in a transfer spot in a consolation race when he slowed with problems. ... Dewaine Hottinger and Richie Hedrick missed the feature after tangling in a consolation accident. ... Others missing the feature: Jeff Walston, Kevin Cole, Frank Heckenast Jr., Denny Woodworth, Mike Hammerle, Jason McBride, John Tindal, Eric Turner, Jon Henry, Ryan Unzicker, Brent Kreke, Billy James and April Farmer. ... Gates open at 4 p.m. Saturday with hot laps about 5:30.