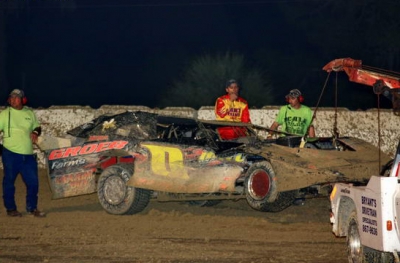 OCALA, Fla. (Feb. 27) — Polesitter Mark Whitener of Middleburg, Fla., led all 50 laps at Ocala Speedway to capture the season opener on the United Dirt Late Model Challenge Series. Whitener earned $3,000 for his third career victory on the 2-year-old tour based in the Sunshine State. | Slideshow

Whitener fended off few challenges en route to victory while Tyler Ivey of Tallahassee, Fla., followed his impressive Florida Speedweeks stretch with an 11th-to-second run. Jason Fitzgerald of Jacksonville, Fla., rebounded for a third-place finish after being shuffled out of the top 10 while Johnny Collins of Jacksonville and Russell Brown Jr. of Valdosta, Ga., rounded out the top five.

Hometown driver Ivedent Lloyd Jr. rallied from 12th up to second, but he got the worst of a tangle with Collins and took his damaged car pitside. Lloyd finished 19th. Shane Williams of DeLeon Springs, Fla., the winner of last year's opener at Ocala, was eighth.

The most serious of 10 cautions periods came in an early turn-four pileup that damaged several cars; Rich Pratt got the worst of it and was the first driver out.

Notes: Whitener is sponsored by United Land Clearing and Jayco. ... Ocala, an asphalt track until 2008, opened its 57th season. ... Christian Augspuirger, 13, made his Dirt Late Model debut but failed to make the feature, finishing a lap down in his heat race. ... Fast qualifier Keith Nosbisch of Valrico, Fla., started outside the front row in the main event and finished sixth. ... The next UDLMCS will be the richest yet. Golden Isles Speedway near Brunswick, Ga., is hosting the inaugural Georgia State Late Model Championship with $10,000 going to the winner of the 100-lapper.