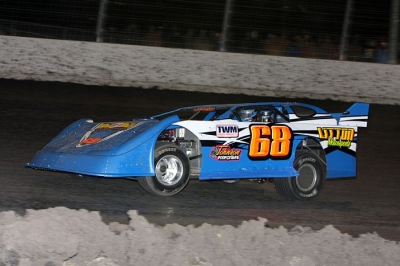 Rob Litton is using No. 68 in honor of his father. (mikerueferphotos.photoreflect.com)

Litton, who duplicated his 2006 victory at TMS, earned $3,500 for the 40-lap victory sanctioned by the O'Reilly Southern United Professional Racing tour at the dirt oval in the shadow of the asphalt superspeedway.

"It's Texas Motor Speedway, you know what I'm saying?" an excited Litton said in a phone interview while loading his car. "We're tickled to death to go out there and run good the first race of the year."

Home-state standout Kevin Sitton of Baytown, last year's SUPR Rookie of the Year, finished second with James Ward of Lettsworth, La., grabbing the third spot in the 2009 series opener. Howard Willis of Dayton, Texas, rallied after winning a consolation race to finish fourth in the main event while three-time SUPR champion David Ashley of Zachary, La., rounded out the top five on a windy, frigid night in the Lone Star state.

Polesitter Doug Ingalls of Longview, Texas — piloting the Waymon McMillan-owned No. 14 — got out of the groove on the first lap and never recovered, falling quickly out of contention.

Litton took command from the outset, but he felt plenty of heat throughout the race at the 4/10-mile track while officially leading every lap. "We got passed in a couple of corners, but got right back around 'em," he said.

Litton's biggest scare came while maneuvering through lapped traffic with Kile, of West Liberty, Iowa, in pursuit. With five laps remaining, Litton headed into turn one just behind a lapped car when Kile tried to make a move on the low side. The lapped car "kind of pinched us down" and Kile made contact, Litton said.

Litton was able to maintain control of his machine, but Kile's car hooked the inside berm and spun to draw a caution. "They said he was right there on me," Litton said.

Notes: Litton's Rocket Chassis has a Wall 2 Wall Performance Engine and sponsorship from LMS Truck Center, Litton Motorsports, Wall 2 Wall, TWM Racing Products and Johnson Enterprises. ... Litton has switched from his regular No. 6x to No. 68 for 2009 in tribute to his recently retired father, who used the No. 68 driving winged modifieds years ago. ... Litton has 16 career SUPR victories and won the 2004 championship. ... The three-night event drew a race-record 397 entries, including more than 200 modifieds and more than 120 limited modifieds. .... Late Model veteran Terry Phillips of Springfield, Mo., won the 40-lap modified feature, edging Canadian Steve Arpin. Phillips and teammate Jeremy Payne both fielded modifieds but didn't bring their Late Models to TMS. ... Travis Evans of Bullard, Texas, won the limited modified main event. ... Former TMS winner John Anderson of Omaha, Neb., was running in the top five when he slowed and pulled to the infield midway through the race. ... Among other long travelers in the Late Model main event: Cody Skytland of Edmore, N.D. (12th); Jeremy Grady of Story City, Iowa (10th); and Mike Balcaen of Winnipeg, Manitoba (14th). ... Kyle Cummings, the regular driver for car owner Raymond Childress, was joined by his father and former SUPR champion Rusty Cummings in a team car. ... Fort Worth racer Tom Earl III was 16th.