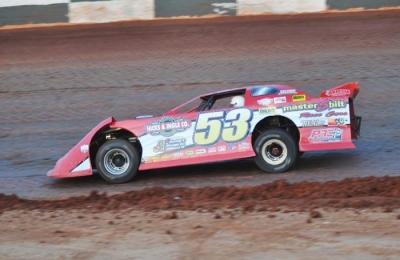 Cook survived a scare on an early botched start but stayed in control all the way to outrun Randy Weaver of Crossville, Tenn., at the 3/8-mile oval near Gadsden. The victory kept this version of the MasterSbilt house car perfect in 2009 feature races with three straight victories worth more than $18,000 in all, including January triumphs at nearby Talladega Short Track's Ice Bowl and Boyd's Speedway neat Chattanooga, Tenn.

"We're tickled to death. MasterSbilt, Race Engine Design, Danny (Dishman) and Ron Ivey, I mean, there's just so many people involved with this besides me. I just get to be the lucky one to drive it," said Cook, who merged his team with D&R Motorsports for 2009. "This car is 3-for-3. We didn't race it at East Bay — we (ran it) the last night and we got wrecked in the first lap of the heat, so we're not counting (that). We're just tickled to death. I don't try to get too high so I don't get too low. You just ride it as long as it'll last because you never know when it's going to end."

Weaver was second in his Mike Hill-owned car followed by previous Bama Bash winners Dale McDowell of Rossville, Ga., and Clint Smith of Senoia, Ga., in a race with single-file racing all the way. Another Georgian, Tony Knowles of Tyrone, rounded out the top five as all the top-five finishers started in the first three rows. Jeff Smith of Rocky Face, Ga., started outside the front row but fell from contention when he slowed to draw a caution, one of a half-dozen yellows.

"Ray ran a great race, congratulations to him," McDowell said. "Other than that, you just had to get in line and follow the leader. It's typical day-racing. There's not much they can do. Everywhere we go, it seems to get one-laned during the day."

Cook officially led every lap, but the third-starting Weaver actually slipped under him on the initial start. However, a spin back in the pack reset the field and Cook didn't slip up on his second opportunity. "I was glad the caution came out," Cook said. Cracked Weaver: "There was about 7,500 reasons why I wanted that to stay green."