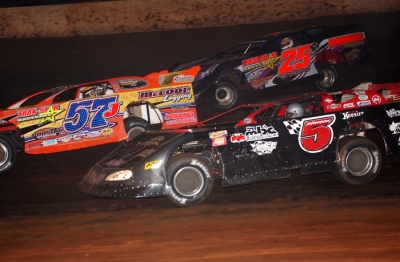 Starting fifth in the unsanctioned Super Late Model race, Johnson worked his way forward and took the lead from hometown driver Rick Rickman a few laps after the second caution of the race, which saw early leader Wendell Wallace of Batesville, Ark., retire with a broken axle.

From there, Johnson ran away from the field in lapped traffic to claim the $3,000 win over James Cline of Oxford, Ala., who came from 11th to take the runner-up spot. Bub McCool of Vicksburg, Miss., survived an early run-in with Rickman to claim third ahead of Alabama drivers Anthony Burroughs and Justin McCree, who started from the outside of the front row.

In the NeSmith Chevrolet feature, Johnson started ninth and rode the high groove to the front, nabbing the lead from Rickman, the fast qualifier, on the 27th lap and went on to his third Crate victory in the past four Winter Classics. He pocketed $2,500.

Rickman crossed the finish line second, but he was disqualified when his car was 20 pounds light at the scales. That handed the runner-up spot to series points leader Brad Hall of Knoxville, Tenn., who started from the outside of the front row. Jay Blair of Angie, La., Cline and Derrick Rainey of Powder Springs, Ga., rounded out the top five.

Notes: Next up at Columbus for Super Late Models is the $7,000-to-win Rebel Challenge on March 14. ... The NeSmith Chevrolet tour heads to East Bay Raceway Park near Tampa, Fla., for three events Feb. 19-21.