Cook makes it 2-for-2 with victory at Boyd's 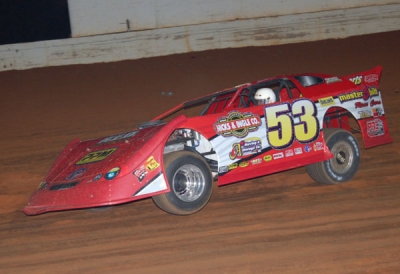 Cook races toward his $5,000 victory. (mikesportsimages.com)

Starting outside the front row and leading all the way, Cook earned $5,000 for his Midnite Oil Racing Fuels 50 victory on a cold evening at third-mile Boyd's Speedway, giving him his second victory in three weeks. Cook, who has joined forces with Kingston, Tenn.-based D&R Motorsports and is driving the MasterSbilt house car, earned $6,000 for his Jan. 4 victory at Talladega (Ala.) Short Track's Ice Bowl XVIII.

Cook outjumped polesitter Rick Rogers of Knoxville, Tenn., on the start and led by a straightaway most of the way en route to the unsanctioned victory at the 57-year-old track just south of Chattanooga, Tenn.

Ronnie Johnson of Chattanooga, Tenn., who rallied from his 17th starting position and rebounded from an early spin, took the second spot from Anthony White of Clinton, Tenn., on the 47th lap but had no chance to catch Cook. White ended up third followed by Eric Turner of Hermitage, Mo., and Tony Knowles of Tyrone, Ga. Rogers ended up seventh while Skip Arp of Georgetown, Tenn., was among the frontrunners early before dropping out.

A backstretch scramble on the first attempted start was the most serious incident of the race. Consolation race winner Chris Wall of Holden, La., Anthony Burroughs of Athens, Ala., Charles Zimmerman of Cunningham, Tenn., and Bruce Taylor of Toccoa, Ga., were among drivers involved.

Notes: Cook's MasterSbilt Race Car has a Race Engine Design powerplant and sponsorship from Hick & Ingles, PPM, Performance Rod & Custom and A+ Moving and Storage. ... Cook was the fastest qualifier among 32 cars. The top six qualifiers ran an inverted-lineup dash and Rick Rogers won it to receive $500 from Precision Products along with the main event's pole position. ... Qualifiers 7-12 were locked into rows 4-6 of the main event while other drivers had to run consolations to earn starting spots. ... Fourth-place finisher Eric Turner of Hermitage, Mo., drove a Steve Rushin-owned car to a solid finish, but he wasn't the longest-traveling driver. Mike Collins of Council Bluffs, Iowa (17th) and Chris Wall of Holden, La. (22nd) were also among long travelers. Wall suffered a painful injury to his right hand, which was swollen after the accident. He planned to get an X-ray to determine the injury, according to his website. ... Fans struggled to keep warm with temperatures dipping into the 30s. Announcer Steve Hixson called the feature from the grandstands because the press box windows were foggy. ... Billy Mayo of Cleveland, Tenn., won the Crate Late Model feature while Mark Rosner of Maryville, Tenn., won the feature for steel-head engine Late Models. ... Next up at Boyd's is the Cabin Fever 250, a seven-division program on Feb. 28-March 1 that includes a $3,000-to-win event for Super Late Models.