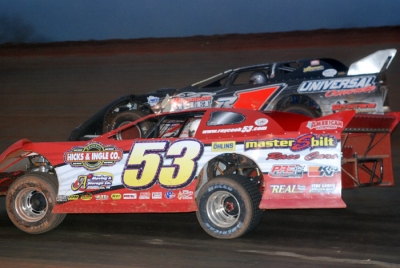 EASTABOGA, Ala. (Jan. 4) — After surviving soupy mud in the pits, a mistaken tire choice for time trials, and a lengthy side-by-side battle for the lead with Hall of Famer Ronnie Johnson during the main event, Ray Cook thought he finally might get a chance to relax during his never-ending Ice Bowl XVIII weekend at Talladega Short Track. But suddenly, just after sliding in front of Johnson for good on lap 36, Cook had his hands full with 2006 Ice Bowl winner Billy Mayo, who came from nowhere to grab the point on lap 37. | Complete Ice Bowl coverage | Column: TST survives, thrives despite mud, rain | Slideshow

"I thought we'd cleared Mayo, and I was just so focused on Ronnie and the lapped cars, when I got by Ronnie I was sort of relieved," said Cook, the Brasstown, N.C., driver who started eighth in the MasterSbilt house car. "Then here comes Mayo."

A lap-39 caution gave Cook a chance to gather himself for a final charge, and he jumped into the high groove on the restart at the third-mile oval to set up another side-by-side duel for the lead, this time with the low-running Mayo. Cook edged ahead for good on lap 42 and opened the 2009 season with a victory that provides a big boost for his new collaboration with Kingston, Tenn.-based D&R Motorsports. Cook was glad to deny Mayo his second Ice Bowl victory while capturing the unsanctioned winter event for the first time during an unseasonably warm weekend plagued by rain and gloomy forecasts.

"I really didn't know once he got out in front if I could get back by him. But on the restart, he went to the bottom in the corner and left us the top, and that's where we needed to be anyway, so it worked out," said Cook, who earned $6,000. "We're just tickled to death to get a win right out of the box."

James Ward of Lettsworth, La., making his first start in a Bloomquist Race Car, used the high groove in the final laps to edge Mayo for the runner-up spot. Mississippi drivers Bub McCool of Vicksburg and Neil Baggett of Shannon rounded out the top-five finishers at the dirt track across the highway from NASCAR's longest superspeedway.

As with most daytime events, one-grooved racing on a sun-baked surface has been the norm at the Ice Bowl. But on this bizarre January weekend with mid-day temperatures near 70, the overcast skies, off-and-on rain and the mud that race cars dragged onto the track after touring the pits kept moisture in the oval and provided a smooth, racy surface.

"It really had two distinctive grooves, bottom and top, where you could run, and it was really a great race," Cook said.

Added Ward: "That was worth tromping through the mud all weekend."

The race featured nine lead changes among three leaders, but Johnson, the inaugural Ice Bowl winner from Chattanooga, Tenn., did his best to make it a one-car show by grabbing the lead from surprising polesitter Jordy Nipper of Gray, Ga., at the outset. Johnson was comfortably ahead through the first half of the race, but when Cook picked his way to the front and caught Johnson on lap 30, the outcome was in doubt the final 20 laps.

Cook worked the low groove against the high-running Johnson, repeatedly pulling alongside and occasionally edging ahead during a side-by-side showdown from laps 31-36. But by the time Cook slid in front of Johnson for good exiting turn two on lap 36, Mayo and a host of challengers had caught the two leaders, and Mayo overtook Cook exiting turn four to lead lap 37. Cook scrambled to keep up, but the field was reset two laps later when the fading Johnson's race ended. Johnson got the worst of a frontstretch scramble, spinning around toward the turn-one entrance and clipping the inside wall.

"At the start of the race, I was really confident. I felt like if we had a good start and could clear the lapped cars, negotiate them well, we might get us a second Ice Bowl. But it didn't work out," said Johnson, who substituted in the No. R1 usually driven by fellow Tennessean Riley Hickman. "We needed a shorter race. ... I was backing up a little bit there and apparently, everyone else was getting a little faster. Stuff like that happens when you're in the way."

On the restart, Mayo dove low in turn one and Cook jumped into the high groove to set up the final duel. Cook went ahead for good on lap 42 while Ward, also in the high groove, moved around Mayo with three laps remaining in the 50-lapper. Ward did his best to catch Cook, but the leader had the cushion of Travis Pennington's lapped car on the final lap and took the checkered flag unchallenged.

The fifth-starting Mayo's car performed well in the high and low grooves earlier in the race — he used the low groove to overtake Cook — but the outcome left him second-guessing his decision to stay low on the final restart. "After that caution, my car was never good again. I chose the bottom — I probably chose wrong," he said moments after congratulating Cook at his pit stall.

Ward, who started in the fourth row alongside Cook, ran in the top five much of the race but took a while to get rolling following caution flags on laps six and 18. "I couldn't run the bottom," Ward said, who fielded a Bloomquist Race Car owned by Mark Schouest. "They kept restarting me on the bottom and it was killing me. I needed that cushion. I'd been fighting the sidebite all weekend, and the cushion saved me. If it wouldn't have been for the cushion, we'd have probably backed up. ... It would've been tough to pass (Cook)."

The race was slowed by three cautions, none for serious incidents. Provisional starter James Cline got into the tire barriers in turn one on the sixth lap for the first yellow. On lap 18, fourth-starting Dingus Griffin and Pennington slid over the banking in turns three and four. Johnson's frontstretch spin brought out the final caution on lap 39.

Todd Morrow, scheduled to start sixth, pulled up lame on the pace laps and was pushed to the pits.