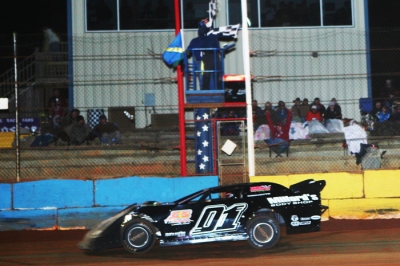 LOXLEY, Ala. (Nov. 16) — Travis Pennington rolled into Deep South Speedway for the three-day Fall Nationals for his first visit to the high-banked track. When his team’s hauler lumbered out of the gates after the conclusion of the final night’s activities, the Winston, Ga., driver had an extra $6,500 stuffed in his Nomex driver’s suit. | Slideshow | Ryan Little captures Crate finale

The 18-year-old son of Hall of Fame driver Jack Pennington added another $4,000 to his weekend totals with a victory in a 40-lapper that closed out the three-day weekend at the Gulf Coast oval. Pennington started next to fast qualifier David Breazeale of Four Corners, Miss., and got the early jump. He then drove away from the field until 14th-starting Clint Smith of Senoia, Ga., showed up to challenge after launching a sterling drive through the pack.

Exclusively using the top side of the racetrack, Smith reached second place and twice chased down the leader from as far back as eight lengths. Smith rolled to the outside of his fellow Georgian between turns one and two near the lap-30 mark, nearly passing the young driver before falling back at the opposite end of the high-banked oval.

“I never really saw him but the crew signalled me to pick up the pace,” Pennington said. “I knew somebody had to be getting close to me.”

Smith ran Pennington down yet again, but a caution waved on lap 35 for a stalled car on the frontstretch, putting an end to the Senoia, Ga. driver’s repeated charges toward the front of the field. Smith wasn’t able to make as strong a bid on the restart despite the race’s double-file restart, and finished four car lengths behind Pennington.

“I almost passed him the first time and was getting ready to try it again when that last yellow came out,” Smith said. “I had to fight off the others on the double-file restart and that kept me from making another charge.”

Breazeale ended up third in thd 20-car field while Mike Boland of Cuba, Ala., and Bub McCool of Vicksburg, Miss., rounded out the top five.