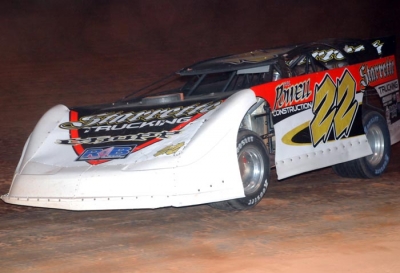 GAFFNEY, S.C. (Nov. 9) — Everyone took the green flag in the 18th annual Blue-Gray 100 planning to conserve their tires. Randle Chupp figured there was nowhere better to do that than from the lead.

The Troutman, N.C., driver swept past early leader Randy Weaver on the sixth lap and led the rest of the way at Cherokee Speedway for a $10,000 victory, his seventh career win on the O'Reilly Southern All Star circuit and first in more than a year. The rear tires on the fourth-starting Chupp's No. 22 were baby smooth after 100 laps, and the right rear was deflating in victory lane, but they held up long enough to help him hold off polesitter Clint Smith of Senoia, Ga., and Jimmy Owens of Newport, Tenn., last year's Blue-Gray winner. | Postrace notebook | Slideshow

"Believe it or not, I felt like if I had to lead I could take better care of my tire than rooting around behind those guys, and I knew those double-file starts early on were going to be awful tough on trying to conserve a tire while you're fending someone off," Chupp said. "I saw I had a little better car than they did early, so I figured I'd take advantage of it and then I could control the pace. You don't have to race the guy in front of you when you're leading, so you can kind of roll instead of slide so much.

"I think we've run second here five or six times. We've always been knocking right on the door. It's awesome to come through with a win, especially with my little boys here, Zander and Xavier. It means a lot to me to win with them around."

While several contenders opted to pit for rubber midway through the race — including Chris Madden of Gray Court, S.C., and fast qualifier Casey Roberts of Toccoa, Ga. — no one who changed tires or had a flat returned to serious contention up front. Chupp built leads of a straightaway margin in the early going, frequenty half-straightaway margins in the second half of the race, and stayed comfortably ahead most of the way.

Only in the final laps when Chupp was hampered by a lapped car did Smith and Owens close in, but the single-file racing didn't allow them much room to work and a lap-98 caution reset the field and gave Chupp clear track for the final laps.

"I knew it was going to be a heckuva battle trying to get a tire to finish, but I had a feeling maybe the top four or five best cars here could do it," Chupp said in victory lane.

Smith, a four-time series champion who dropped back as far as fourth early in the race, settled for second while the third-starting Owens ended up third and discovered in the pits he had more tread left than the others. Pete Ivey of Union, S.C., was running fourth at the white flag but fell back after contact with 18th-starting Ray Cook of Brasstown, N.C., who survived a lap-13 tangle to finish fourth. Roberts rallied to finish fifth. Weaver, who started outside the front row and led early, pitted to change a flat right-rear tire on the 32nd lap and subsequently dropped out.

Smith wasn't sure Chupp's right rear tire would last as he repeatedly pulled away on restarts. "I thought he was attacking early, and then he kept driving off every time and not saving really anything," Smith said. "Me and Chris (Madden) got to messing around (and) I got back by him just because it was open, then I put it back in cruise mode and never slipped the tires. I've got better rubber than (Chupp) — his is going flat now on the straightaway. We almost played it right.

"At the end, me and Jimmy both made a charge, but I made mine the same time Jimmy made his ... we both caught (Chupp), but the caution came out and kind of foiled that. Randle was a little better than both of us with open track."

Owens had trouble staying in the low groove exiting turn four, but he was good enough to chase down Chupp in lapped traffic along with Smith in the final laps. "We had a good car but we were way, way tight through (turns) three and four," last year's winner said. "But to keep up with those guys and be that tight, we felt like we had a really good shot at doing a little something there at the end. Tire wear was going to be an issue and we were just babying it trying to go the distance with our tires. We got back in (the pits) and we had plenty of tire left, so we probably could've run a lot harder (or charged) a lot earlier. But it was one-laned and pretty hard to pass anyway."

The race was slowed by 11 cautions, most for flat tires and slowing cars. The most serious incident was a lap-13 scramble exiting turn two that left Jeff Cooke's car heavily damaged. Two tow trucks were required to remove the No. 99 in a wreck that also involved Cook.

Notes: Randle Chupp's Rocket Chassis has a Randy Clary-built engine and sponsorship from Starrette Trucking and R.W. Powell Construction. ... Blue-Gray fast qualifier Casey Roberts of Toccoa, Ga., is making a habit of being fastest at major events. A week earlier, he lowered the East Alabama Motor Speedway track record at the unsanctioned National 100. ... Two strong Cherokee performers and Hall of Fame drivers ran into trouble in time trials. Freddy Smith of Seymour, Tenn., lost a front-row starting spot in a heat race because his qualifying time was scrapped when he weighed in light at the scales. Scott Bloomquist of Mooresburg, Tenn., never got up to speed after breaking a rocker arm and loaded his No. 0. ... Jay Sessoms was running in a transfer spot in a consolation race when a flat tire dropped him from contention. ... Hall of Fame driver Mike Duvall, who announced 2008 will be his last season behind the wheel, was added as a provisional starter for the feature event and paced the four-wide parade lap. ... Series rookie Anthony Hill and Monk Gulledge got series provisionals. ... The Blue-Gray is the final Super Late Model event of the season at Cherokee. ... The Southern All Stars wrap up the season with the $5,000-to-win Gobbler at Cleveland (Tenn.) Speedway on Nov. 15.