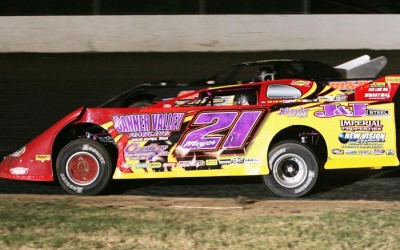 COLUMBUS, Miss. (Oct. 17-18) — For the first time in his career, Hall of Famer Billy Moyer of Batesville, Ark., experimented with a spec engine package popular with Mississippi racers. Consider the experiment a major success. | Slideshow

Driving his No. 21 with a Wall 2 Wall powerplant under the hood, Moyer started outside polesitter Chris Wall, jumped into the lead at the outset and led all the way in the fifth annaul Cotton Pickin' 100 for an unsanctioned $15,000 victory at the track west of Columbus.

"Now I can see why Chris Wall and some of these other guys are so hard to beat down South," Moyer said when asked about the spec engine. "The spec motor package was perfect for the track conditions last weekend at Magnolia. The track was so slippery on Friday night, but you could race all over it. Then on Saturday, it unfortunately locked down right away, but we had a good car and got the job done."

Moyer, who also won the inaugural event in 2004, had a straightaway lead by the midpoint of the feature event and, despite a late-race caution that gave Wall and others one last crack at Moyer, he cruised the rest of the way. Wall, of Holden, La., finished second followed by Ronny Lee Hollingsworth of Northport, Ala., in a race with mostly single-file racing.