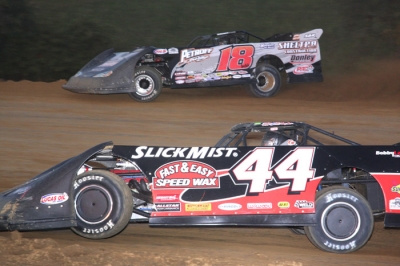 BROWNSTOWN, Ind. (Sept. 27) — After a rain-plagued weekend at Brownstown Speedway, Earl Pearson of Jacksonville, Fla., woke up Sunday morning thinking it was just as well if the 30th annual Jackson 100 was cancelled altogether. By late afternoon, he was definitely glad the Lucas Oil Late Model Dirt Series event went off as rescheduled. | Race history | Slideshow

Taking the lead with 18 laps remaining, the 11th-starting Pearson won the first daytime race in the history of Brownstown's signature event. Running behind a torrid battle for the late between fast qualifier Shannon Babb of Moweaqua, Ill., and Don O'Neal of Martinsville, Ind., Pearson raced past both frontrunners and headed for his third career victory at the quarter-mile oval in southern Indiana.

The 37-year-old Pearson earned $12,000 on a weekend that saw a two-day show condensed to one day, postponed by rain after one heat race on Saturday night, then held on Sunday afternoon for a 100-lapper that featured eight lead changes among five drivers.

"Thanks to the Brownstown track crew for getting this track raceable today," Pearson said. "I know they worked real hard today on it. This morning I was hoping they would cancel it with all the rain they had and the mess that was out there, but it turned out real well for fans and I hope they saw a great race out there.

Those last two cautions really helped me because I am not sure if I could have caught Babb and O'Neal. They were having a hack of a race for the lead and myself and (Steve) Casebolt ran side-by-side for several laps out there.

"You could run anywhere on the track. It was rutty in spots, but with all the rain they've had here this year, it was amazing we could even race today."

The seventh-starting Babb, who led on three occasions for 21 laps and rallied from the rear after an early caution, finished second with O'Neal in the third spot. Last year's winner Tim McCreadie of Watertown, N.Y., rallied from 12th to finish fourth and outside front-row starter Scott Bloomquist of Mooresburg, Tenn., boosted his series points lead with a fifth-place finish.

At the race's outset, Bloomquist took command over polesitter Wayne Chinn and led three laps until Josh McGuire took over after a drivers strung out four-wide. The high-running Babb went ahead on the sixth lap, but McGuire went back out front on lap 10 and Babb slowed exiting turn four. Without pitting, Babb rejoined the field on the tail.

McGuire went back to work in the lead with Pearson up to fifth, but O'Neal slipped ahead before a caution for debris on lap 17. O'Neal, Pearson and McCreadie briefly went three-wide for the top spot while Babb was suddenly back up to fourth by lap 23.

With O'Neal in lapped traffic on lap 26, Pearson was hot on his heels. But Babb got rolling again in his high groove, took second from Pearson on the 34th lap and battled fiercely with O'Neal, finally edging ahead just before the halfway point.

The Babb-O'Neal showdown continued with Pearson and Casebolt battling for second behind them when a lap-70 caution appeared for a McGuire, who slowed running sixth.

The fifth-running McCreadie brought out another caution for a flat on lap 74, and Pearson came live on the restart while Babb and O'Neal continued a side-by-side duel.

Pearson wheeled around both frontrunners on lap 82, and with no further cautions, he extended his lead and marched to his second series victory of the year at Brownstown and his series-leading 17th career Lucas Oil victory.