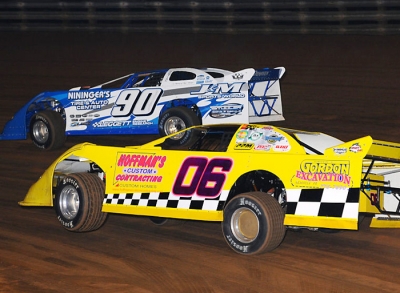 Gary Stuhler (90) gets the jump on polesitter Mike Lupfer (06). (wrtphotos.com)

“Starting position helped a bunch, but it’s such an honor to win this thing,” said Stuhler, driver of the Nininger Tire & Auto Center late model. ”I’m glad for Glenn and all those guys. I know they wanted me to win. I put a lot of pressure on myself before this night came. In his honor, I’m just glad to do it for him. I think (Red) was with us.”

Stuhler, of Greencastle, Pa., was in command of the race from the start with Tyler Armstrong giving chase from the third lap. Stuhler’s racer began smoking on the final lap but won his 125th career and second of the season by .81 seconds over Armstrong. Fourteenth-starting Keith Jackson, Marvin Winters and Rick Eckert rounded out the top five.

“I think we broke a piston,” said Stuhler, who earned $4,000. “It kind of laid down there coming for the white flag. I thought it was getting bad coming off two, I didn’t know if I’d make it down the back straightaway it was getting that bad. It just held on enough, I don’t think I would’ve have made it another lap.”

Notes: The event was part of the Winchester/ Hagerstown Shootout and a makeup from a June 14 rainout. The track narrowly averted another rainout after showers arrived during Late Model hot laps, forcing a two-hour delay. The night's final checkered flag waved at 1:26 a.m. ... Ray Kable Jr. held the third spot until dropping out on lap 23. ... Nathan Durboraw brought out the red flag when he took a horrific series of flips in turns three and four when he caught the fence and began rolling with the car ending in a standup position. He wasn't seriously injured.