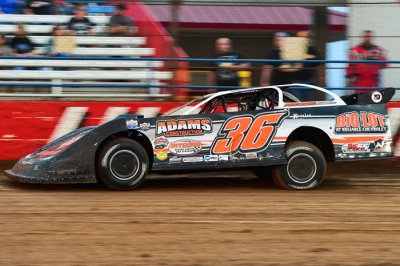 "It's been good," said 21-year-old West Plains, Mo., driver who moved up from the modified division. "The main thing is we wanted to race and we wanted to click off a few wins."

Martin looks for more highlights Saturday when he joins the Lucas Oil Late Model Dirt Series for the 11th annual CMH Diamond Nationals at Lucas Oil Speedway, an event co-sanctioned by the Lucas Oil Midwest LateModel Racing Association. The Pitts Homes-sponsored USRA modifieds also are on the program, which begins with hot laps at 7 p.m.

Martin heads to the $12,000-to-win event on a two-race winning streak after claiming the MARS West Series-sanctioned Tony Roper Memorial at Monett (Mo.) Speedway on July 2 and a weekly show at his hometown Legit Motor Speedway

"We're up to five wins on the season and we're coming off two wins in a row heading into this weekend," said Martin, who also plans to enter Friday's Lucas Oil Series event at Tri-City Speedway in Granite City, Ill. "That's a real confidence booster. … We're not running a tour full time, just running when we can. I'm happy with it."

Martin credits Bill Frye, the former MLRA and MARS champion from Greenbrier, Ark., for much of his success. A former national touring racer, Frye has supplied support and shared knowledge with many, including Martin.

"We got the new Rocket XR1 over the winter and Bill Frye has helped us a ton," Martin said. "He's made the transition easy. He's helped our notebook and sped up our transition in terms of setups. I call him every week to bounce ideas off him, kind of go over what we did over the weekend and what we can do better.

"He's always full of answers. It just makes going to the track a lot easier. His clientele is large and he has guys calling every week with information."

For Martin, who recently opened his own body and repair shop in Seymour, Mo., another highlight came when he set fast qualifying time at July 1's UMP DIRTcar Summernationals event at Federated Auto Parts Raceway at I-55 in Pevely, Mo. Martin settled for 12th in the feature, but with little time-trial experience, he learned he could run with national-touring teams — much like he did at the Show-Me 100 in late May.

The Show-Me, where Martin was 12th, is special to Martin because he grew up watching it as a youngster when it was held at the former West Plains Motor Speedway.

"It was definitely cool, not only to make the Show-Me on our first attempt, but with the history of the Show-Me at West Plains," Martin said, noting that former West Plains Speedway owners Don and Billie Gibson used to let him run his micro-sprint during intermissions.

"I really wanted to make the (preliminary Don and Billie Gibson Tribute on Friday night (during Show-Me weekend). They have done so much for the sport," Martin added.

It was at Legit Speedway Park in West Plains last fall, in one of his first outings in a Late Model, where he won a MARS feature. He called that "totally unexpected" but a great springboard into the offseason.

"That meant a lot to everybody, for the (racing fans) in the town, to me and the team," he said.

Martin thanks his sponsors (Big Lot Reliable Chevrolet, Adams Construction, Steed Brothers Trucking, Bill Frye Motorsports and Integra Shocks and Springs) and crew members and supporters (his parents, girlfriend Larissa Atnip, Michael Cawvey, Garrett Graves and Matthew Hayes) for helping him to a bright future. He’d like to stay focused on the near term for now with the goal of finishing 2017 strong.

"It would be cool to run a full schedule of one of the regional tours or a national tour. That's always a goal," Martin said. "Finding the backing and the finances to make it happen is the most difficult part."