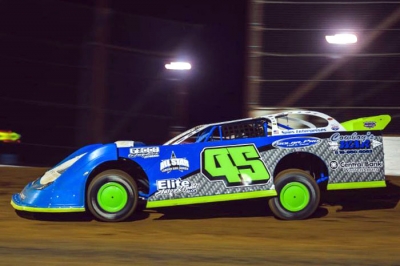 Lucas Oil Speedway Andy's Frozen Custard Victory Lane always is a happy place, but it seemed a bit more joyous than normal two weeks ago when Aaron Poe and his inner circle paid a visit at the Wheatland, Mo., track.

"That meant a lot and it was big — not just for me," Poe said of his first win, in the Warsaw Auto Marine & RV Late Model division sanctioned by the Lucas Cattle Co. United Late Model Association.

"It was big for my dad (Tim Poe) and for Harriet (Chancellor)," Poe said. "She gave us an opportunity last year to drive Cowboy's car. It meant a lot to dedicate that win to him.”

Harriet Chancellor remains a major backer of Aaron Poe's race team, which carries the No. 45 that Allen "Cowboy" Chancellor drove during his racing career. "Cowboy," who also was a long-time owner of the Lucas Oil MLRA Series, died three years ago.

Poe is carrying on Cowboy's legacy quite well. The Warrensburg, Mo., driver has been ultra consistent this season, just his second in a Late Model, and holds an 11-point lead over defending track champ Aaron Marrant entering Saturday's Midseason Championships.

Being in front of the points at the conclusion of this Saturday's event would mean a $500 bonus, thanks to Victory Lane Track Action Race Review and Lucas Oil Speedway. But the 31-year-old Poe has his eyes on a bigger prize.

"As far as the halfway point, we definitely would like to be up front ... but we're trying not to look too far ahead," Poe said. "We're trying to take it one race at a time and make sure we're in contention each night, keep our car clean and if I do that, it's usually a top-five car. We're trying to manage the season the best we can."

Poe's racing passion began when he was about 7 years old when his dad took him to his first race at Sedalia State Fair Speedway. He quickly got to know Bob Larson, a leading Modified driver at the time, and began to hang in the pits each week helping any way he could.

"We followed Bob all the way until I was about 16 and able to drive my own car," Poe said. "(Larson) let me practice in his car at Adrian Speedway and, after that, I knew that I had to get one. That was all she wrote."

Larson retired from racing soon thereafter and Poe's next big racing influence was Jason Bodenhamer, a leading competitor on the MLRA circuit. Poe worked in Bodenhamer's shop for a time and got to know the Chancellors. Later, Poe began to drive his own modified.

Then last year, Poe's brother-in-law, Warrensburg modified racer Marc Carter was approached by Harriet about driving the No. 45 Late Model.

"Marc didn't have the time to dedicate to two different cars, so he threw my name in the hat to Harriet," Poe said. "Luckily, the stars aligned and she gave us the opportunity."

Poe finished eighth in Lucas Oil Speedway points last season. He's used that experience to propel him into 2017 where, in a new Bob Pierce Platinum car, he has two third-place finishes and a fourth to go along with the breakthrough feature win.

"Last year we were in a 2003 Warrior. For its age and how many laps it had, it did damn good," Poe said. "It was clean and never had been severely wrecked. But we got into watching Bobby (Pierce) and he seemed to be really similar to my driving of driving style and what's kind of how we locked into getting a Bob Pierce car. I'm glad we went in that direction. We have it dialed in."

"I also have to give special thanks to Mom and Dad (Rhonda and Tim Poe), Marc and Andrea Carter, Barb Poe, Wes and Jeni Kirtley, Phil Sullivan, Chuck Anderson and Mark Lewis," Aaron Poe added.

"It's luckily been a real easy-going year so far," Poe said of the car's maintenance. "Not too much damage to repair or parts to replace. Hopefully we can keep that going.”

"As far as the halfway point, we definitely would like to be up front ... but we're trying not to look too far ahead," Poe said. "We're trying to take it one race at a time and make sure we're in contention each night, keep our car clean and if I do that, it's usually a top-five car. We're trying to manage the season the best we can."