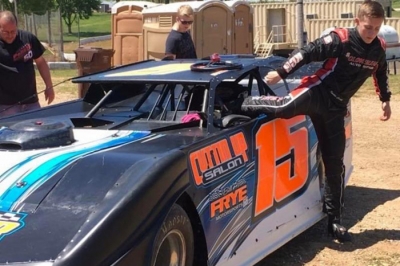 Widely considered a fast-rising talent in the modified division, Kaeden Cornell is scheduled to take a major next step in his dirt racing career Saturday at Lucas Oil Speedway.

The 16-year-old from Willard, Mo., is set to debut in a Late Model when he climbs behind the wheel of a Rick Hoover-owned Rocket in the Warsaw Auto Marine & RV-sponsored division at the Wheatland, Mo., oval, where he’s previously competed in USRA-sanctioned B-modified division.

Cornell is wrapping up his sophomore year at Willard High School and he will be doing double duty at the speedway. He’s scheduled to continue driving his family owned B-mod, trying to improve on his third-place finish in division points last season.

The youngster has impressed veteran drivers with his poise and driving style said he’s long dreamed of getting behind the wheel of a Late Model. His Hoover Motorsports teammate is Aurora’s Shane Essary, a veteran of the division, which is sanctioned by the Lucas Cattle Co. United Late Model Association.

“I’ll be able to learn a lot from him,” Cornell said of Essary. “He’s been racing as long as I’ve been alive.”

Cornell tested the Late Model on Sunday at Springfield (Mo.) Raceway, estimating he turned about 50 laps on a dry and slick surface. Not surprisingly, he found it a different — but valuable and fulfilling — experience.

Staying open-ended about his expectations in the bigger car going into Saturday, Cornell said his primary goal is to learn all he can. Final exams might be finishing up at school, but an advanced racing education is about to commence.

“I’ve gotten into a few A-mods before and the motor screwed with me a little bit coming out of a B-mod,” Cornell said. “I was pretty worried about that. But I think having (the Late Model’s) bigger tires helped that.

“At the beginning of the test session, I have to say I wasn’t that great. You have to drive those things so much harder than you do a B-mod. I didn’t know you could drive a race car that hard."

Cornell said he found throttle control to be vitally important and he’s going to “have to be really good with my feet” in the Late Model.

“I learned quite a bit in the laps that I turned - probably more in one day than I’ve ever learned in a race car. It was a pretty fun day. I had a blast, one of the most fun days I’ve ever had in a race car.”

Cornell said Hoover is supportive of his desire to keep driving the B-mod, where he’s received support from modified veteran Mike Striegel and Outlaw Race Bodies. Double duty will make preparation during the week and race night more hectic, but Cornell said he doesn’t anticipate any problems.

His father, Aaron Cornell, does most of the mechanical upkeep and grandpa Glen Cornell, who used to do mechanical work for some ARCA teams, supplies helpful advice. A host of other friends volunteer to help out on race nights.

“Rick was really cool about all of that,“ Cornell said. ”He told me whatever I wanted to do with the B-mod was up to me. It’s pretty cool for him him to give me an opportunity like this.

“I think it’ll work out all right. When I used to run go-karts, at the big shows, we’d run seven classes in a day. Laps are laps. The more laps you turn, the better I think you’re going to be.”