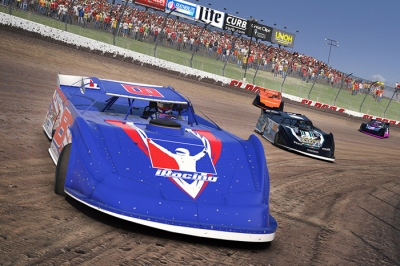 On April 1, 2016 a tantalizing message appeared on the iRacing.com members site: Dirt Confirmed.

About a year ago, Steve Myers, iRacing’s executive vice president and executive producer, explained that the popular online motorsports simulation service had embarked on what many a racer considered the Holy Grail of eSports: virtual Dirt Late Models, sprint cars and tracks that faithfully replicate the “real” things.

The fact that the story was posted on April 1 — and that iRacing had a history of playing “gotcha” with its members on April Fool’s Days past — prompted many to dismiss the story. Others, keenly aware of iRacing’s reputation for near-maniacal devotion to authenticity, could only hope Myers was serious.

Underlining its commitment to Dirt Late Model racing, iRacing partnered with Clint Bowyer Racing and Darrell Lanigan’s No. 14 entry in the Lucas Oil Dirt Late Model Series and other events in 2017, including the Dream and World 100 at Eldora Speedway.

As part of the agreement, CBR worked closely with iRacing vehicle dynamic engineers to build their virtual Late Model. A group from iRacing traveled to the team’s shop in Clemmons, N.C., where they laser scanned Lanigan’s car and discussed the intricacies of chassis setups with their counterparts at Clint Bowyer Racing.

“The CBR guys were a huge help in getting our Late Model on the fast track, so to speak,” says Steve Reis, iRacing vehicle dynamic engineer and former race engineer for Penske Racing. “They opened their books for us and shared their setups and chassis tuning data, which not only shortcut the building process but resulted in a digital car that responds just like the real thing to setup changes.”

“It was a lot of fun working with iRacing and getting them the technical data for the Dirt Late Models,” Bowyer said. “It’s amazing how they can take the real world information and get it to work so seamlessly into the virtual world. All of our guys in the shop can’t wait to beat up on each on track! It’s a lot fun for my guys and fans.”

That’s a tribute not only to the realism of iRacing’s dirt track cars but to the remarkably authentic characteristics of the digital dirt tracks themselves.

With nearly 100 tracks already in its catalog, iRacing had plenty of experience successfully modeling pavement ovals and road courses. But creating digital dirt surfaces that constantly change as cars slide around, building-up tire rubber and compacting the dirt with each passing lap even as dynamic ambient temperatures, humidity and sunshine affect the chemical composition of the track itself? Progressively building a “cushion” and accurately reproducing how drivers search for the fastest lines through the turns during the course of a race? Those were new and exciting challenges for the iRacing engineers and artists.

Once the prototype cars and tracks had been created, top flight sim racers like iRacing champion Tyler Hudson and NASCAR drivers Christopher Bell, Kasey Kahne and Kyle Larson were tasked with testing the cars and tracks to insure they met iRacing’s exacting standards.

The result was worth the effort.

“The coolest part about it is how real the (dirt) track surface changing is,” Larson said. “Absolutely blown away! iRacing did a great job.”

Comments posted on the iRacing forums by members around the world support Larson’s take on the dirt racing feature.

“I was up until 3 a.m. driving the late model,” Iowa’s Robby Morrison wrote. “Now I’m at work struggling with seeing my computer screens clearly!”

“DIRT gave me a massive smile today taking all the Late Models and Sprint Cars out on the various tracks,” Australia’s Darren O’Brien said. ”The DIRT cars are amazing . . . just can’t get enough of them. Thanks iRacing. Awesome job by all.“

Indeed, whether they race at Eldora, Willams Grove, Daytona — or in their game rooms — racers agree that iRacing just got better with dirt.

A live stream of the weekly iRacing World of Outlaws Craftsman Late Model Series action appears each Sunday at DirtonDirt.com at 9:30 p.m. EDT (8:30 p.m. CDT) on May 7. Viewers can watch a broadcast of the “drivers” with the highest iRating competing against each other on a well-known dirt track. The free iRacing stream can be accessed at dirtondirt.com/iracing.php.