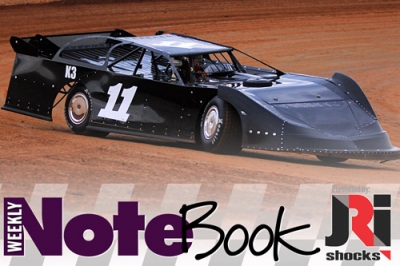 As Spencer Hughes of Meridian, Miss., took the track for his first-ever Crate Late Model feature, his main goal was to finish the race with a top-five run. The 16-year-old street stock standout would have never imagined he’d go on to pick up his first career Crate victory.

But that’s exactly what happened in the March 10 Battle of the States at Hughes’s hometown Whynot Motorsports Park. Following up the win with a runner-up finish at Whynot over the past weekend, the Mississippi teen tops DirtonDirt.com’s first JRi Shocks Weekly Notebook of the season.

“We kind of partnered with (long-time car owner) Randy Thompson this year,” Hughes said. “I've been driving for him. We went into the Battle of the States and we practiced that Thursday night and that's the first time I'd ever really drove a Crate car. That was my first Crate race. We just kind of went out there hoping for a top-five and we ended up being about the quickest thing there all night. I had a good race with Justin McRee in the feature and it worked out in our favor in lap traffic. It was just a real good race and I really enjoyed it.”

The night was special for Hughes, who’s been racing since he first climbed behind the wheel of a go-kart at age 6. He knows it’s not often that a driver’s first Late Model race and first Late Model victory come in the same night.

“I was hoping for a top-five really,” Hughes said. “That's all I really wanted, to just be consistent. We definitely didn't think we'd go out and win that first race. It meant a lot. I believe Whynot's one of the toughest places to win in a Crate Late Model around here, so it meant a ton to go out there and win first night out against some guys that's been racing longer than I've been alive.”

Hughes has spent the past couple of seasons competing in the NeSmith-sanctioned street stock division. Closing 2016 with 21 victories, the teen clinched the NeSmith division championship.

“We ran a car that we had bought from one of our neighbors in the 2015 season,” Hughes said. “Then in 2016, that off season we built us a new car. We didn't really go out to run for the national championship in the street stock. That wasn't really one of our goals. We just wanted to go race. We ended up winning five or six races in a row and we looked at the points and we were in the top five.

“We were winning almost every weekend and running really consistent, so we just kept racing every weekend. And then next thing you know we're in the top three in the points. We just kind of stuck with it all 27 weeks and ended up winning the national championship. We had a lot of success in that car. “

But despite all of his street stock success, driving a Late Model has always been one of Hughes’s racing goals.

“I've always wanted to run Crate Late Model,” Hughes said. We had an opportunity with Randy Thompson that we couldn't really pass up. So we talked it over and we decided to go for it. I just thought it was a good opportunity and we'd try to make the most of it.”

While the Crate car and the street stock do drive a bit differently, Hughes said he thinks the experience of the 2016 season helped prepare him to make the transition to the new division.

Now that he’s got his first Crate victory behind him, Hughes is focused on putting together a consistent 2017 season.

“I just want to run as good as we can,” Hughes said. “I don't really have any goals or whatever … just to try to do the best we can and keep running consistent. I don't think we're going for any points. We're just going race and try to race at a bunch of different race tracks and gain as much experience as we can.”

• Capturing the Mike Peters Open, Mark Whitener of Middleburg, Fla., earned $3,000 on March 25 at Bubba Raceway Park as he held off a charge from 11th-starting Kyle Bronson.

• Leading a podium sweep by the Conley clan, R.J. Conley of Wheelersburg, Ohio, grabbed a March 25 victory at Atomic Speedway near Chillicothe, Ohio, to outrun brother Rod and father Delmas.

• After closing midway through 2016, Northeast Arkansas Speedway in Harrisburg will reopen this season as Old No. 1 Speedway. The track was sold in February to Paul Tribble and his family from previous owners T.J. Thompson, Jimmy Thompson and Warren Fender. The track, which previously hosted Late Model events, doesn’t plan to have Late Model in his four-division programs on Friday evenings.

• Mountain Motor Speedway in Isom, Ky., announced the gates won’t open in 2017. While the eastern Kentucky oval had originally set an ambitious slate for the season, including four $3,000-to-win Super Late Model events along with its weekly racing, promotor Tony Sturgill said that due to “circumstances beyond his control” the track will sit idle.

• Midway Speedway in Crooksville, Ohio, has scheduled a special June 30 race for Late Model drivers who haven’t won a feature in the division. Five non-winning Late Model drivers apiece from Midway’s May 19 and June 18 races will make up the 10-car field for the winner-take-all event on June 30. Drivers must be present for both the May 19 and June 18 events to be eligible to compete in the June 30 race.

• Farmer City (Ill.) Raceway has replaced its aging (and rickety) announcing and scorer’s box ahead of this weekend’s Illini 100 for the World of Outlaws Craftsman Late Model Series.

• Elkins (W.Va.) Raceway has scheduled the inaugural Red Frederick Memorial for June 30, a $5,200-to-win event and double-points race for Super Late Models that will serve as the track’s mid-season championship. Frederick, one of the winningest Semi-Late Model drivers in West Virginia in the late 1970s and early ‘80s driving a No. 52 entry owned by Randy McCartney, died Jan. 23 at age 89.

NeSmith Chevrolet (Crate Late Models): After one week of action, Mississippians Jim McDuffie (winner at Whynot) and Chase Washington (winner at Columbus) are atop the standings with 50 points apiece.