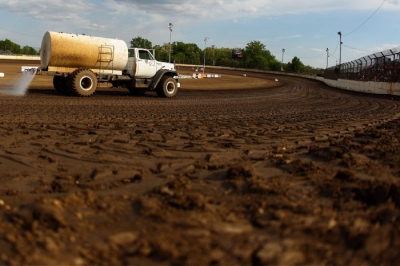 And why not? With the track’s biggest payoff ever on the line for Saturday night’s 75-lap Super Late Model finale — a cool $17,000 prize — he sees his vision of a blockbuster season-opening event for the Midwest coming to fruition.

“I can’t be more thrilled with where we are with this Thaw Brawl,” Izzo said. “We’re now six years down the road after a crazy dream I had that, if we could put something big together early enough in the season, it could grow legs and become successful.”

From its modest beginnings as a $5,000-to-win UMP DIRTcar-sanctioned event in 2012, the Thaw Brawl has blossomed into a two-day show that garners plenty of attention from the Dirt Late Model world. This year Izzo is throwing even more cash at the deal, posting a $7,000 winner’s check for Friday night’s preliminary feature — up from $5,000 the past two years — and jacking up Saturday evening’s headliner to a hefty 17-grand that represents the division’s richest first-place payoff so far in 2017.

The Thaw Brawl finale has paid $15,000-to-win in each of the last three years, but Izzo decided to increase the victor’s reward to match the last two digits of the current year.

The cash and the affair’s sanctioning — MARS DIRTcar Series West and Sunoco American Late Model Series, both UMP DIRTcar tours — will undoubtedly help draw a stout field to the central Illinois facility, including two-time Thaw Brawl champion (2012 and ’14) Dennis Erb Jr. of Carpentersville, Ill., who has the opportunity to compete at his home-state track with the Lucas Oil Late Model Dirt Series idle this weekend. Earl Pearson Jr. of Jacksonville, Fla., is another Lucas Oil regular who will take advantage of the national tour’s off weekend to enter La Salle’s action behind the wheel of the Freeport, Ill.-based Larry Moring Motorsports machine.

One of the new wrinkles that Izzo plans to introduce to this year’s Thaw Brawl — an event that awards its ultimate winner with a WWE-style championship belt in lieu of a traditional trophy — is a unique ceremony during which Saturday night’s heat winners will have their feature starting spots determined by fan participation.

“We’re gonna let the fans decide where the heat winners start,” Izzo said. “We’re not gonna just have the racers come out and draw a random number out of the hat. We’re gonna do it by decibel (sound) levels. We’re gonna bring the heat winners out — whether it’s four or six — and have them on the stage, and we’ll record the decibel numbers of the cheers each guy gets from the fans and the one who gets the loudest (response) is gonna be on the pole and the guy who gets the least amount of cheers is gonna start fourth or sixth.

“We just want to get the fans involved and bring in a little something different. They paid a ticket to come and see, so let them cheer and decide who starts on the pole. It should be interesting depending on who wins the heat races — especially if a real popular local wins one.”

Izzo is hopeful that there will be plenty of people populating his grandstands to produce a giant roar. All indications are pointing to superb attendance for the Thaw Brawl, which will also have both its nights of racing available online with DirtonDirt.com producing live pay-per-view programs.

“I do worry about weather because at that time of the year it could get cold, but I don’t worry anymore about whether the people will come,” Izzo said. “The people have shown that they will support it, and I can’t be more thankful than that.

“Ticket sales have been great, so we’re really excited about that. We offer VIP camping (spots) if fans want it, too, and a lot of people are taking advantage of that.

“The camping is really a big part of the event that we want fans to take advantage of,” he added. “I want the people to come and experience what we’re all about. I want them to stay there and have a good time. We sit on 50-, 60-some acres, with a lot of timber and stuff around too, so we encourage people to camp and enjoy themselves.”

The Thaw Brawl will kick off a ’17 season dotted with special events under the direction of Izzo, who was a successful Dirt Late Model driver (he won the 1995 UMP DIRTcar national title) before switching his motorsports emphasis to race promotion. He oversees Sixteens Race Promotions, a company that presents special shows at La Salle and other tracks.

One of the new promotions on Izzo’s docket is a two-day UMP DIRTcar Summernationals program at La Salle set for June 16-17. Friday night will pay $5,000 to win and Saturday evening will offer a $10,000 top prize.

“We’ve got the double-day Summernationals this year which we’re really excited about,” said Izzo, who anticipates that the bar he is currently building on La Salle’s grounds will be open for post-race revelry in June. “It kind of fell into our lap because they’re not doing the two-day deal (at the start of the Hell Tour) that was always at Cedar Lake (Speedway in New Richmond, Wis., in recent years) … they chose to go a different direction with the modifieds (headlining Cedar Lake’s Masters event), so we jumped on that. I think it’ll draw a bigger field for us and have more interest.

Izzo also has a Summernationals event booked for June 29 at Sycamore (Ill.) Speedway that will pay $5,000-to-win.

“We were able to team up with Sycamore, UMP and Sam (Driggers, the UMP DIRTcar director) to bring a Summernationals event to Sycamore for the first time ever,” Izzo said. “That place has been around 60-some years, and so many race fans that support La Salle and Fairbury and even Sante Fe (the defunct track outside Chicago) back in the day are located near there. It’s real close for Dennis Erb, too.

“Of all the races I’m putting on, even though it’s not a big-paying race, it’s the one most people seem to be talking to me about.”

Izzo’s slate of Dirt Late Model promotions is filled out by a pair of Lucas Oil Series events, on May 18-19 at La Salle and Luxemburg (Wis.) Speedway, which will host the tour for the first time. Izzo promoted a Lucas Oil show at Oshkosh (Wis.) Speedzone Raceway the last two years but looked elsewhere for a Badger State date due to uncertainty with Oshkosh’s status.

“It was well-documented that the fellas I worked with (at Oshkosh) in the past weren’t sure if they were gonna get the lease when Lucas Oil was looking to put their schedule out,” Izzo said. “We were on the fence about what to do. I couldn’t get a definite (about Oshkosh), so we went forward with another option.

“I reached out to the people at Luxemburg and they’ve been really good to work with. That area — right near Green Bay — is really excited to have the Lucas Oil Series come to town, and the racetrack really races good from everything I’ve seen and heard. I’m gonna make a few visits up there myself before the race to make sure we’re ready with track prep and safety and all those things.

“That race is another one we look forward to. Oshkosh was great and a lot of people liked it. It raced good. But a lot of people are excited to go to a new venue, and it throws a little bit of a monkey wrench into the Lucas deal because every couple years I change the venue of my (second) race.

“I’ve got my plate full, but I wouldn’t want it any other way,” he concluded. “I just want to do whatever we can to keep putting excitement into Late Model dirt racing.”