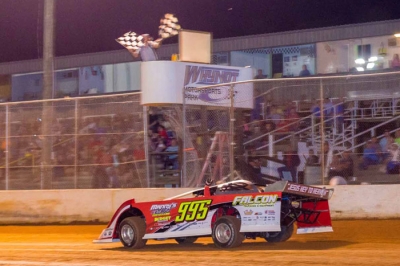 When the World of Outlaws Craftsman Late Model Series resumes its season later this month in Mississippi, the top five drivers in the series points will be separated by 28 points following four Georgia-Florida Speedweeks races.

Former series champion Rick Eckert of York, Pa., is glad to be among them as the national tour plans for its visit to Whynot Motorsports Park in Meridian, Miss., for the first race of a March 24-26 tripleheader that continues at I-30 Speedway in Little Rock, Ark., and Lone Star Speedway in Kilgore, Texas.

“We still have a long way to go until the end of the season,” said Eckert, who is four points behind leader Brandon Sheppard, “but this is the first time in a couple years that we’ve come out of Florida this close in points and we’re in a good of a position.”

Eckert and at least 14 other series regulars will tackle a Whynot oval nicknamed the “House of Hook” because “it is hooked up, wide multigroove, plain badass racetrack,” according to track owner and promotor Rodney Wing. The 3/10-mile, progressively-banked oval has a reputation for good racing.

“We have a track that is very, very racy and I think the fans can expect to see a lot of three and four-wide action throughout the entire night with the best drivers in the country,” said Phillip Hathcock, the track’s marketing director. “This is definitely the biggest race we’ve had come to our facility and we are excited to present an event of this magnitude to our fans.”

Whynot is getting a second chance to host the series after 2013’s scheduled event was washed out.

“We are really looking forward to having the World of Outlaws in town,” said Dede Mogollon, the executive director of Visit Meridian Tourism. “A few years ago the Series was scheduled to visit Meridian and the community was very excited but due to bad weather the event was cancelled.

“We are excited for the opportunity to host the Series again and to be able to show off the town of Meridian to racing fans and show them what we have to offer. We have over 2,000 hotel rooms, a wide variety of great restaurants and live music around town every night that fans will be able to enjoy before and after the race.” — Kayla May

NEW LIGHTING AT PORT ROYAL: Port Royal (Pa.) Speedway, which is scheduled to host the World of Outlaws and Lucas Oil Late Model Dirt Series in 2017, announced last week plans to install new Musco track lighting during the 2017 season. A specific timeline hasn’t been announced for the project done in conjunction with the Juniata County Agricultural Society. The lighting will be included for the racetrack and newly expanded pit area.

I-80 POSTS REWARD FOR STOLEN EQUIPMENT: I-80 Speedway has posted a $1,000 award for the return of safety equipment recently stolen from the Greenwood, Neb., oval. Among items missing from a track garage is a Jaws of Life powerpack, spreaders, cutters, fire extinguishers and firesuits. Call the track at (402)-342-3453 if you have any information.

EAST BAY EMPLOYEE DIES: Rodney Chesebro of Clearwater, Fla., who frequently worked the turn-two gate at East Bay Raceway Park in Gibsonton, Fla., died on March 6. He was 39. “Even though he was having health issues, he worked as long and hard as his body would let him,” the track posted on its website. “Some days he was told to stop and go rest, but he just wanted to keep on because there was something that needed to be done. We will miss him greatly.” A memorial gathering for Chesebro will be 1-3 p.m.  Sunday, March 19, at Serenity Meadows Funeral Home in Riverview, Fla.

ODDS AND ENDS: Ron Shuman and his wife Paula have taken over promotions at Wildcat Raceway in Tucson, Ariz. Shuman is a Hall of Fame sprint car driver from Tempe. … Monett (Mo.) Speedway’s new owners released a schedule with plans to race on Sunday nights through Memorial Day weekend before switching to Friday’s the balance of the season. … Delaware International Speedway in Delmar, Del., has removed infield tire barriers, added clay to the bottom of the turns and increased the banking of the half-mile oval for the 2017 season. … Skyline Speedway in Stewart, Ohio, will have a Hard Luck Award each week with the recipient receiving a free pit pass for the track’s next scheduled event.