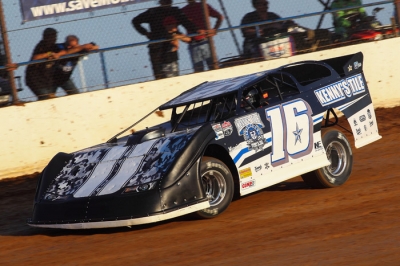 He didn’t initially realize he was injured when he knocked wheels with another competitor in October’s MLRA finale, causing the steering wheel of his No. 16 to jerk out of his hands. After the pain never subsided, he visited a doctor and lined up the operation. It could be May before he’s ready to race again.

"It's the first time I've ever been hurt racing,” said Siebert, whose car is sponsored by his father’s Kenny’s Tile & Flooring, where he also works. “The Late Model steering is so fast and the tires are so big, it doesn't take much contact and wheel just jerks out of your hand. It's not uncommon for it to spin two full times over before you really even have time to react.”

Siebert plans to field the same Capital Race Car he ran last season, along with competing in the modified division.

"It took me a while to get comfortable in it,” Siebert said of the Capital car. "Their recommended things to try just really don't fit with the hard tires we race on. I kind of went on my own with shocks, late in the year, and really had a better feel for the car. I plan to start out a little more on my own deal and hope to learn some more.”

A transplant from pavement racing, he got his start in the super truck division at I-70 Speedway in Odessa, Mo., but he’s glad to be running dirt now.

"I'm so glad it worked out like it did,” Siebert said. "I love dirt racing. You show up at five or so and run the race, and if you are close to home you can be home by midnight a lot of times. It seems like when we pavement raced, we tested and practiced all the time, actual racing was such a small part of it.”

After focusing primarily on modifieds for many seasons, Randy Timms of Wheatland, Okla., returned to Late Models for the first time in a dozen years in 2016, scoring a MARS-Comp Cams victory at Tri-State Speedway in Pocola, Okla., along with three home-state victories on the new Sooner Late Model Series.

The 46-year-old will stick with Late Models again this season, frequently running with MLRA again, but he squeezes in his race while owning and operating the Western Flyer Xpress trucking company along with his father Rodney. The Oklahoma City operation has a fleet of 500 trucks and trailers.

"It was pretty special to just get a win in my Late Model,” Timms said of last season’s success. "It was reassuring to me and our guys. It let us know that when our stuff is right we can win. I just don't get to focus mentally on racing like a lot of my competition.

"I'm involved in overseeing basically every aspect of the company. One of the things I really spend a lot of time doing is procuring new equipment. It's a never-ending task. We started with two trailers that we owned, and since 2012 have doubled in size. I really slowed down my modified racing about that time to help grow the business.”

Timms races closely with reigning MLRA champion Jesse Stovall of Galena., Mo., and also has a relationship with 2017 Rookie of the Year candidate Rodney Sanders of Happy, Texas, who competed with Timms for many seasons in the modified division.

“I am sure there will be a weekend where Jesse will be at the track and I can't make it,” Timms said. “I won't ever be able to see the schedule months ahead and know for sure I can be at the scheduled race. I have to do my racing around work, and it will always be a week-to-week deal for the foreseeable future.”

Full speed ahead is the best way to describe the racing plans for J.C. Wyman of Griswold, Iowa. Having completed his second full year with the MLRA in 2016, he's preparing another assault on the competitive Midwestern tour. He ended last season on a strong note, including a Sept. 2 victory at Lakeside Speedway in Kansas City, Kan., his first on the series.

"To me looking back it was kind of like a fluke win,” Wyman said. "This year I really want to back it up and get another win or two, so I can prove to myself it wasn't. I heard from others how big it was to win with the Lucas Oil MLRA, and as much as we have ran with the tour we know how special it is.

“What I remember the most is how cool it was for so many drivers, who I race against, to congratulate me after that race. It was really special and unexpected. I appreciated all of them taking a minute to do that.”

Wyman has planned an ambitious 2017 schedule, fielding a new Black Diamond Chassis with a pair of fresh open-competition engines. He’ll drop a steel-block engine in his older Black Diamond car to run closer to home.

"I want to run a minimum of 50 times this season,” Wyman said. "We are keeping our old car so we can run the (Nebraska-based) Malvern Bank Late Model Series every chance we get.”