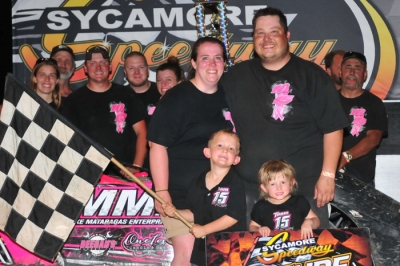 But as much as he love trips to victory lane, the 34-year-old driver and his team are focused on more than just winning, raising over a couple thousand dollars in support of breast cancer awareness. | Slideshow

With its bright pink numbers and a design that includes the Pink Ribbon symbol for International Breast Cancer Awareness, Brendle’s car is easily one of the most noticeable on the racetrack. The look of his No. 15 machine was just the start of the Illinois driver’s awareness efforts that have grown in to a successful fund-raiser for the cause.

“One of our sponsors, his mom had breast cancer,” Brendle said. “We were talking about pink, it seemed like was a nice bright color that not a whole lot of people had. You could see the car very well. We decided to do pink one year and it just sort of evolved. It started getting sponsors, like D&D Jewelers. The owner of D&D Jewelers' mom had breast cancer. She did a lot of stuff for that, so we kind of of got hooked up with her.

“We thought it would be a great idea to have people sign the back of the car. Turned out we got probably $2,000-3,000 in the last couple years donated to Breast Cancer Awareness. They give whatever donation they want to do and sign the car. Kids like it. They get to sign the car and watch it around the racetrack. It's turned out to be a very good thing and I think we're going to keep going with it.”

Aside from his fund-raising efforts, Brendle’s 2016 race season was another successful one. Wrapping up his second Sycamore title in 2015, the Illinois driver set out to clinch a third, notching 14 victories en route to the northern Illinois oval’s Super Late Model championship.

“The season was great,” Brendle said. “I started out the season winning eight in a row, and then lost one close second, and then I think I won two, three more in a row, lost one and then won a few more in a row. That's just how the whole season went. I started towards the back of the pack almost every night and was able to run through traffic without any problems. The track was really good and the guys were really hard to race against, but everybody drove clean and it was a lot of fun.”

But Brendle knows three consecutive track championships don’t come without hard work. He was quick to attribute his on-track success to the dedication of his entire team, knowing how special it is to find this much consistency in the world of Dirt Late Model racing.

“I owe everything to my guys and my sponsors,” Brendle said. “I’ve got my crew chief, Bill Phillips, he's been with me for about five years. And when we finally started clicking and getting stuff together, I took off. My guys are committed 100 percent. Our families are committed 100 percent. And I think that's the reason we're able to do as well as we have. Championships are hard to get. Winning races are even hard to get, so to be able to win races and at the end of the year be the guy on top, that's kind of a big deal.”

With all of his home track success, Brendle admits that the thought of branching out and running a more regional schedule is sometimes appealing. But he is grateful for all the Sycamore has to offer.

“The best part about Sycamore is that it's very family-oriented and it's closer to home,” Brendle said. “I would love to run other places, but with the cost of racing, it's really hard to travel, to get help, and even to get family and people to come follow you around to other places is kind of hard. With Sycamore it's very easy for family to come every week. My kids get to come and enjoy it every week.”

With the 2016 season behind him, Brendle is already looking forward to 2017 and a shot at his fourth consecutive Sycamore title.

“Hopefully to do as well as we did last year,” Brendle said. “I would love to repeat again, but I just want to have fun and I just want to make my sponsors and family proud.”

“Turned out we got probably $2,000-3,000 in the last couple years donated to Breast Cancer Awareness. (Fans) give whatever donation they want to do and sign the car. Kids like it. They get to sign the car watch it around the racetrack. It's turned out to be a very good thing and I think we're going to keep going with it.”