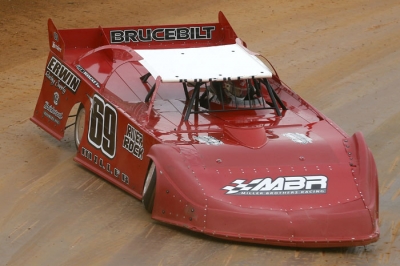 After capturing the 2016 Limited Late Model track championship at Natural Bridge (Va.) Speedway, Carder Miller of Salem, Va., is already looking ahead to bigger and better things in 2017, starting with his Super Late Model debut at Dec. 31’s Hangover 40 at 411 Motor Speedway in Seymour, Tenn.

Miller, who is nearly a decade younger than most of his competitors at just 12 years old, clinched the Natural Bridge title in just his first season behind the wheel of a full-fender car. He picked up four wins on his 2016 campaign, finishing every race he started and running just one spot outside of the top-10 at 411.

“This car … I had a MBH at the beginning of the season and it was on and off with the racing,” Miller said. “But once I got in the XR1 Rocket, it was good every time we went out.”

Miller works closely with veteran driver Russell Erwin of Beaverdam, Va., crediting him with much of his 2016 success.

“It’s kind of unbelievable because I have one of the best of the best telling me how to do it,” Miller said. “He’s been teaching me and I think one day I’m going to be able to get up there and hang with him.”

Erwin has enjoyed watching Miller grow as a Late Model competitor. Racing at different tracks, the two are able to bounce information back and forth and improve both of their racing programs.

“I didn’t see him winning a race this year,” Erwin said looking back. “I said, ‘Man, if you’re running consistently top-fives at the end of the year, that’s my goal for you.’ Steel block racing in Virginia and North Carolina is really, really stout. All the good guys are all in them steel block cars. I really didn’t see him winning a race and his first race in it he won. It definitely says a lot about him as a driver. It’s been great watching him grow all year.”

“Ever since I got in to it, I kind of looked up to the big guys that were racing,” Miller said. “I want to be one of them, so I’m going to see what I can do.” — Alli Collis

FARMER CITY OPENS TICKET SALES: Farmer City (Ill.) Raceway has opened sales of tickets and camping sites for the May 11-12 Farmer City 74, a first-time event with $3,000- and $20,000-to-win events co-sanctioned by the Sunoco American Late Model Series and the MARS DIRTcar Series. Two-day reserved seats are $50 for general admission. Email Gunner Sullivan at gjsullivan@aol.com for ticket and camping requests and visit farmercityracing.com for more ticket information.

ASPHALT BEING REMOVED AT MANSFIELD: New Mansfield (Ohio) Motor Speedway promoter Cody Sommer originally planned to cover the track’s asphalt with dirt, but has since decided to remove the 18-year-old asphalt because of its poor condition, according to a report last week in the Mansfield News Journal. “They've done patching work and different things over the years and it's really deteriorated,” Sommer told the newspaper. “The racing surface has cracks all over it. It's really gotten to the point where it's starting to fall apart. The big fear in putting dirt over top of it is you're going to make a situation that's already bad worse.” Sommer said he was concerned about rocks or asphalt chunks could work through the dirt surface. The track is scheduled to open March 25 with the first of three straight $5,000-to-win Super Late Model races.

USRA INCREASES LIMITED EVENTS: The USRA-sanctioned Limited Late Model division that has run the past two seasons at Mississippi Thunder Speedway in Fountain City, Wis., will run at five other tracks in 2017, including previously announced dates at Cedar Lake Speedway in New Richmond, Wis. Other tracks hosting events are Decorah’s Upper Iowa Speedway, Cresco (Iowa) Speedway and Red Cedar Speedway in Menomonie, Wis. Besides weekly events at Mississippi Thunder, 18 other races are scheduled, including at Cresco’s fair race June 22 and Red Cedar’s Punky Manor Challenge of Champions on Sept. 21. USRA plans a points fund encompassing all the sanctioned events, according to Mississippi Thunder’s Bob Timm.