From contributor, team and track reports 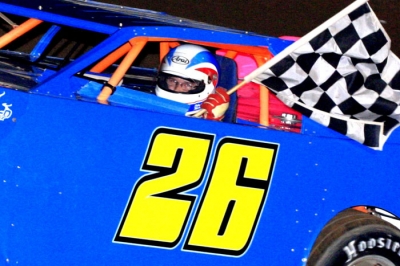 A long-time Georgia dirt racer, Skip Pannell spends most of his time at the track these days as a co-owner of Albany Motor Speedway, helping operate the quarter-mile oval in southwestern Georgia.

But with the track hosting the Gary Patnaude Memorial on Oct. 22, Pannell was compelled to compete in the Late Model event and pay tribute to the technical inspector who died unexpectedly earlier this season after complications from surgery.

Pannell decided to bring his 2001 Dominator Chassis out of mothballs and, instead of just being part of the action, Pannell raced to victory in a blue car reskinned with the No. 26 that Patnaude had fielded during his racing days.

Pannell set fast time and led every lap, turning back challenges from Kelly Walker for the victory.

“I could sense that my good friend, Gary Patnaude, was riding with me and this was going to be our race,” said Pannell, whose victory was witnessed by Patnaude’s widow Bobbi and his daughter, Michelle Creech. “God bless the fans that came out to pay tribute to a great man.” — Mark Dhaemers of South Georgia Racing

Other notes from around the country:

SHEPARD TAKES OVER AT WARTBURG: Long-time east Tennessee driver and track worker Raymond Shepard recently purchased Wartburg Speedway, InsideDirtRacing.com reported. The 42-year-old from Kingston, Tenn., bought the track from Mike Kittrell and is planning improvements for the 2017 season. “I’ll tell you that it’s a big step, but I think we can improve it and make this place better,” said Shepard, who has served as race director at Wartburg, I-75 Raceway and Spring City Raceway. “We’re putting new lights up and we’re getting ready to demolish some old bleachers and redo all of them. We’re just trying to improve on a lot of things out here. The main thing is keeping the track up, cutting the weeds and replacing the things that need replaced.” He plans to announce 2017’s racing classes during the off-season with the possibility of hosting a touring Late Model special. — Richard Allen

McCOWN FOCUSING ON ATOMIC IN 2017: After taking over the Short Track Auto Racing Stars series in 2016, Atomic Speedway owner Brad McCown won’t operated the STARS tour with plans to focus on the track near Chillicothe, Ohio. “I would like to thank Carl Short for the opportunity with the STARS Late Models in 2016,” McCown said. “However I have decided to focus more time and energy into our race tracks in 2017.” McCown does plans to continue the Buckeye Late Model Dirt Week as an unsanctioned miniseries. McCown’s Jackson County Speedway is for sale, but he said he’ll plans on operating the track himself if its not sold in the off-season. — Track reports

ROBERTS TAPS HURST TO REPLACE GUSS: Jeremiah Hurst of Dubuque, Iowa, will replace a retiring Ray Guss Jr. in the Roberts Motorsports No. 58 for 2017. The 40-year-old Hurst actually made three late-season starts for the team with plans for a full season in 2017. The team sponsored primarily by Eriksen Chevrolet-Buick and Roemer Machine & Welding, plans to run IMCA-rules and open-competition engine events fielding a Black Diamond Chassis. Guss, a three-time IMCA weekly champion had more than 90 victories for the Hershel and Ken Roberts-founded team. Hurst is a long-time Iowa racer and two-time winner on IMCA's Deery Brothers Summer Series. — Team reports

PATH VALLEY IMPROVEMENTS: Path Valley Speedway in Spring Run, Pa., is making several improvements for the 2017 seasons, including adding 365 tons of clay to resurface the quarter-mile oval and Jersey barriers surrounding the track. The track is also doing an off-season renovation of the track’s bleachers. The track has also added a new welcome sign and stone surface near the general admission booth. — Track reports

ODDS AND ENDS: The Lucas Oil Late Model Dirt Series has added another event to the series schedule after its unveiling at Portsmouth (Ohio) Raceway Park. Florence Speedway in Union, Ky., will host a $10,000-to-win event Thursday, Aug. 10, preceding its Sunoco North-South 100 weekend. … Travis Nickel has taken over as promoter of Southern Ohio Speedway in Wheelersburg, Ohio, with plans to reopen the track in 2017. … Driver Chesley Dixon of Swainsboro, Ga., who suffered severe burns in a Labor Day accident at his hometown track, is continuing his recovering with his right arm and right leg completely healed, according to a report from his wife Bridget.