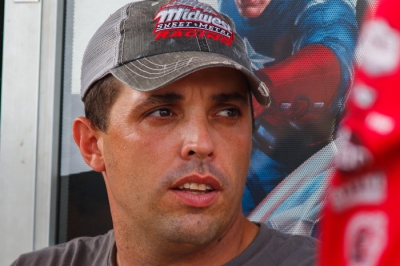 In trying to wrap up his first Lucas Oil Midwest LateModel Racing Association title during a season-ending doubleheader weekend, MLRA points leader Jesse Stovall of Billings, Mo., will try to put his struggles during Labor Day weekend behind him.

Stovall carries a 72-point lead over reigning and three-time MLRA champion Terry Phillips of Springfield, Mo., into the Fall Nationals as his lead shrunk after his trouble at Sept. 2-3 events. In J.C. Wyman’s victory at Lakeside Speedway in Kansas City, Kan., Stovall broke a rear end and finished 21st in the 23-car field while the following night at Wheatland he gave up a straightaway lead with fewer than 15 laps remaining when his engine expired.

"We had a bad couple of nights,” the 36-year-old Stovall said. "In those situations you worry about losing the money for the race, but also the championship points too. After those two races it took us a little bit to recover.”

"I have no doubt we have the race car to be as good as we were the last time at Wheatland," Stovall said. "There are a lot of factors though and things that will need to go our way. We went to West Plains (Mo.) last weekend and tested to just further try and be ready for this weekend.”

Along with MLRA regulars, the Fall Nationals will include a mix of new faces with the Arkansas-based Comp Cams Super Dirt Series co-sanctioning the event. The series makes its first appearance at Lucas Oil Speedway and its first appearance in Missouri since a 2012 event at the now-closed Malden (Mo.) Speedway.

"We're thrilled to welcome in the drivers and staff which make up the CCSDS," MLRA series director Dan Robinson said. “(Series owner) Chris Ellis has done a good job growing the tour and we couldn't be happier to have them here in Wheatland running alongside the Lucas Oil MLRA. It will help make for a great weekend. Our fans are sure to see some drivers not typically at Lucas Oil Speedway.”

The series has been operating since 2007 with a champions list that includes Greenbrier, Ark., drivers Jack Sullivan and Bill Frye, Kyle Beard of Trumann, Ark., Billy Moyer Jr. of Batesville, Ark., and Jon Mitchell of Texarkana, Texas.

"We started out very humbly,” said Ellis, whose day job is athletic director for the Beebe, Ark., school district. "It was never really hard for us to get races in the beginning, but the funding to run it and pay the points fund has always been a challenge. We have a great group of friends who have really supported us.

“I can't thank Chris Douglas with Comp Cams enough for the continued support. They have been great for our series. Also, Lucas Oil for getting involved with us a few years back too. There are so many other folks who just want to see the series operate and they continue to support it. I have an immense amount of appreciation for everyone who keeps it running. It's a team effort for sure.”

Like MLRA, the Comp Cams tour will wrap up its season in Wheatland with Hunter Rasdon of Jonesboro, Ark., holding a 34-point lead over Beard and 37-point margin over Sullivan. Rasdon, a five-time series winner in 2016, will be making his third trip to Lucas Oil Speedway.

"I have never been real good at Wheatland,” Rasdon said. “I hope we can get rid of that monkey on our back this weekend. I stayed home from the Gumbo Nationals (in Greenville, Miss.) last weekend just to go over both race cars so I knew we were prepared. We'll be there Thursday night to practice. Hopefully we will be a little better there.”

Practice at Wheatland if scheduled for 6-9 p.m. Thursday; some competitors will be running Thursday in a $6,600-to-win MARS DIRTcar Series event at Springfield (Mo.) Raceway that also serves as a makeup on the UMP DIRTcar Summernationals. … Tad Pospisil of Norfolk, Neb., has already locked up MLRA's Sunoco Race Fuels Rookie of the Year heading into the weekend finale. … Bobby Pierce of Oakwood, Ill., who became the sport’s youngest World 100 winner last month, and Brian Shirley of Chatham, Ill., are among Illinois invaders expected at Wheatland. … Former Dirt Track World Champion Wendell Wallace of Batesville, Ark., is also expected; he’s the all-time leading Comp Cams Series winner with 20 victories in the tour's 178-race history.