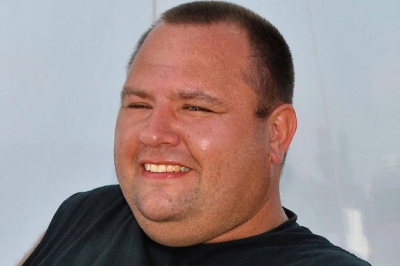 “He was a big guy and I’m a big guy as well,” Ruhlman said. "Getting in and out of these cars is kind of a struggle because the window openings are tight. He didn’t have a containment seat and neither do I, for the simple fact that with a containment seat, him or I can’t get in or out of the car. My fear was always being trapped in the car upside down if it was on fire.

“They had pictures of (Unger) before the race sitting in the car. I said, ‘My gosh, that’s exactly how my seat is.’ So I’ve been working with a kid here, an engineer, developing a removable head restraint to basically make a containment seat for big guys. The left side is removable, so we can kind of get the same effect of a containment seat, but we can still get in and out of the car.”

Remembering Unger as a fun-loving guy who had continued to improve his on-track performance over the years, Ruhlman said he hated that it had taken such a tragedy to get him thinking about his own safety. But he’s hopeful that he might prevent the same incident from happening in the future.

“I was always the one that said, ‘Oh I’ll never run a left-side headrest because I don’t want to be trapped in the car,’” Ruhlman said. "That was kind of the motivator for me to work on something that would do both. If anything comes out of that, it was an awakening for me, to look at my own equipment and see that we’re not that much different in the way we approach things, and I need to do something to fix that.” — Alli Collis

GUSS CALLS IT A CAREER: National Dirt Late Model Hall of Famer Ray Guss Jr., of Milan, Ill., ended his 38-year Dirt Late Model career last month on the Deery Brothers Summer Series at West Liberty (Iowa) Raceway, finishing 15th. “It’s been great. I can still remember one of our first Deery wins at Marshalltown (the season opener in 1989),” Guss said. “I’ve had an awesome career.” In all, Guss collected 90-plus wins driving for Hershel and Ken Roberts during the final stretch of his career. “I was almost ready to quit when Hershel called,” he said. “I told him OK, we’ll give it a shot, and I’m glad I did.” — Bill Martin

BARNETT RECOVERING AFTER WRECK: Four-time Brownstown (Ind.) Speedway champion Steve Barnett of Franklin, Ind., hopes to be out of the hospital by the end of the week after Sunday’s surgery to fuse his T-5 vertebra. The 59-year-old Barnett was seriously injured in a violent, barrel-rolling accident at Brownstown on Oct. 1 in a heat race on the Ultimate Battle of the Bluegrass Series. Along with his back injuries, Barnett suffered a fractured nose and fractured collarbone. — Jaime Schaefer

GATEWAY TIRE, FUEL RULES ESTABLISHED: The VP Racing Fuels Gateway Dirt Nationals presented by Karl Performance has set tire and fuel rules for the Dec. 15-17 event at the Dome at America’s Center in St. Louis, Mo. The tire rule will closely follow Eldora Speedway’s new tire rule with Hoosier LM-20s permitted on any corner and LM-40s allowed only as an option on the right-rear. No grooving or siping is allowed. Fuel rules allow racing gasoline only (no alcohol or fuel additives). Additionally, fueling of cars is allowed only outside the building. — Kelley Carlton

WINDY HOLLOW HOSTS SUPER LATE MODELS: Windy Hollow Raceway near Owensboro, Ky., will host a rare Super Late Model event on Sunday, Oct. 9. The King of Clay pays $2,500-to-win out of a $12,000 purse at the D-shaped western Kentucky oval. Racing starts at 4 p.m. Six other divisions are on the card. Visit the track’s Facebook page for more information. — Track reports

SECA SUSPENDS SOUTH CAROLINA DRIVER: Crate Late Model racer Raymond Brown of Chester, S.C., has been suspended one year by the Southeastern Crate Association for using illegal seals on his car’s engine in an Oct. 1 event at Friendship Motor Speedway in Elkin, NC. Brown was also disqualified from the event and must pay a $1,000 fine before returning to SECA competition, the organization announced. — Series reports