One month after crash, Shirley set to return 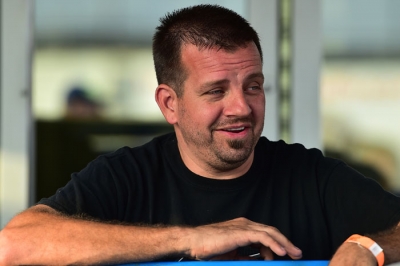 It was a little dent on the top of Brian Shirley’s Bell helmet, but in that divot was a story that was equally horrific and relieving. Shirley, in the midst of attempting to complete the entire World of Outlaws Craftsman Late Model Series schedule for the first time, experienced first hand the assumed risks of racing.

On Sept. 3, the 35-year-old driver from Chatham, Ill., led the 24-car field to the green flag in the 75-lap WoO-sanctioned Working Man feature at Lernerville Speedway in Sarver, Pa. As he began chasing his fourth win of 2016 on the national tour, Shirley did what he typically does best — skate the top of the cushion, building up maximum speed into each of the straightaways.

But on this 4/10-mile oval, riding the cushion was flirting with disaster. Though Shirley recorded consistent sub-16-second lap times all weekend, disaster struck in the blink of an eye on the fourth lap of the A-main. He rode out one of the worst series of flips he’s experienced since embarking on an auto racing career in 2001, leaving him with a concussion that has kept him sidelined for the past month.

As Shirley fought to regain positions he lost in the opening circuits of Lernerville’s extra-distance event, his Bob Cullen Racing/Arnie Ranta Longhorn machine bicycled into turn one and then somersaulted into the air off the cushion, barrel-rolling some five times over the berm. He came to rest off the track and upside down, and as the red flag waved his crew chief, Chad Simondsen, bolted towards the scene from the inside of turn three where he had stationed himself to signal Shirley.

“I started running across the infield right away as he started flipping,” Simondsen said. “I've seen a couple flips in my career, but it's a completely different feeling when it’s not only your driver, but also your best friend.”

Shirley said his right-rear tire barely got over the lip of the track and then the race car dug into the Pennsylvania clay. Though the track is slightly banked, it was steep enough for the frame rail to catch. Using the point of contact as a launching pad, Shirley said it ended up being “a pretty nasty wreck.”

First responders tended to Shirley while an emotional Simondsen needed to be held back from the accident. It was only when the ambulance arrived back in the pit area as Simondsen and Co. were looking over the damaged car and collecting their cargo to head to the following evening’s WoO event at Selinsgrove (Pa.) Speedway that Simondsen could finally see Shirley and make sure his driver was all right.

Assessing Shirley following the havoc, Simonsden said he looked to be well enough to race the next day; a little bit of a headache seemed normal for a driver that had been thrown into the sky. Shirley simply told Simondsen that he would see how he was feeling in the morning and just go from there, and they loaded up and headed east toward Selinsgrove, about three hours away.

“Once I flipped, I thought I was OK,” Shirley said.  “I’ve flipped before, but I’ve usually raced the next day. I’ve never wrecked that bad.”

Simonsden remembers the first hour of their trip to Selinsgrove vividly. Shirley sat in between him and the truck driver, and for the first hour the rig navigated through the hills and hollows of the Keystone State. With about an hour left in the trip, the team stopped for fuel and food.

Shirley, reluctant to eat, sat in the hauler as the others went into the gas station. They then returned to what they had feared. In a 180-degree reversal, Shirley was struggling with headaches, dizzy spells and sensitivity to light. With clear symptoms of a concussion, the rig immediately rerouted to a nearby hospital.

Shirley was examined in the emergency room and, nearly four hours later, at 3 a.m., the team was headed back to Illinois. Shirley was in no condition to race at Selinsgrove due to a concussion.

After a thorough inspection of the car upon the team’s return home, Simondsen suspected that the dent in Shirley’s helmet was from hitting the roll cage. Thankfully, the helmet neither cracked nor split. As for the car, the major damage was a bent frame.

Shirley had to sit out racing until he showed no further problems from his concussion, forcing him to miss the Sept. 8-10 World 100 at Eldora Speedway in Rossburg, Ohio, and the Sept. 15-17 Lucas Oil Late Model Knoxville Nationals at Knoxville (Iowa) Raceway, among other events. A lengthy break in the WoO schedule after Selinsgrove, however, allowed Shirley time to recover without completely demolishing his points chasing; though he fell from fifth to eighth in the standings after missing Selinsgrove (he did receive 60 hardship points), he still is within striking distance (82 points) of a fifth-place points finish with a solid weekend in the season-ending World Finals doubleheader on Oct. 27-29 at The Dirt Track at Charlotte in Concord, N.C.

And make no mistake — Shirley expects to be back guns blazing for the World Finals. He’s feeling much better and is ready to return to the cockpit this week with tentative plans to enter Thursday night’s MARS DIRTcar Series event at Springfield (Mo.) Raceway and perhaps the Friday-Saturday Lucas Oil MLRA-sanctioned Fall Nationals at Lucas Oil Speedway in Wheatland, Mo.

Shirley reassured his fans that he will be “100 percent both mentally and physically” upon his return.

“When I get back racing we’ll put it to the wood right off the bat,” said Shirley, who has a new Longhorn Race Car ready for action. “If you’re going to second guess getting hurt, s—, there ain’t no reason for me to be doing it.”

Simondsen expects the same old “Squirrel” behind the wheel. He said readjusting back to racing will not be difficult for him — and Shirley agrees.

“Any time you’re not racing, it messes with you,” Shirley said. “You’re always trying to perfect your race car and get better, and anytime you’re not racing you lose a little bit. But we’ve raced enough this year where we won’t be too far off the pace. We’ll be able to get back up to speed.”