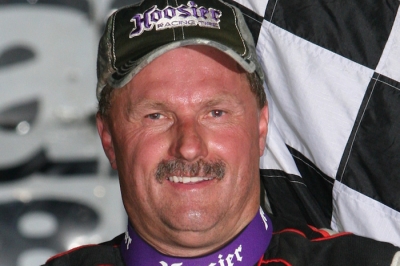 Tyler Bruening and Jeff Aikey will decide one of the closest point races in the Deery Brothers Summer Series’ 30-year history during the Ideal Ready Mix Lib­erty 100 weekend at West Liberty (Iowa) Raceway.

Aikey already owns seven Deery championships and knows all about tour nailbiters: He was one point better than Rob Toland in 2006, in another series title chase that wasn’t decided until the final event.

“I’m excited about the chance to win an eighth title and my whole team is pumped up. We were excited about winning a fourth straight Super Nationals at Boone. We’ve been to­gether since 1995 and I think I have one of the best teams in Iowa,” he continued. “When I’m in the car, I give it 150 percent. When they’re in the shop, they give 200 percent. Our maintenance is bar none the best.”

Bruening has been a series regular since 2009. He’s got a win and three second-place showings through the first 15 Deery events this year.

“It’s fun that it’s come down to this. I’m looking forward to getting back on the track,” Bruening said. “It’s bittersweet to see it come to an end. I wish we could keep racing.”

Maintenance was also one of the factors he credited in his success.

“It’s a lot of things. You’ve got to have a dedicated program in the shop. You’ve got to have some luck, too. We’ve been in good positions this year and we’ve been consistent,” said Bruening. “It helps having run the series and knowing what to expect from track to track.”

Both drivers have a provisional to spare and are guaranteed starting spots in Saturday’s main event. Aikey has a 2-to-1 edge in features won already this season and thus brings the tie-breaking advantage to town.

A 20-lap, $1,000 to win Iron Man feature for drivers with perfect series attendance this season and former Deery champions is on the schedule along with qualifying races on Friday, Sept. 23, when racing follows 7 p.m. hot laps. Grandstand admission is $15 for adults and $10 for students ages 13 to 18. Pit passes are $30.

Another $2,500 to win non-points feature is on the docket for Deery drivers following Saturday’s main event, inverted by lead-lap finishers from the first race. Hot laps are at 6 p.m. and racing gets underway at 6:30 p.m. Grandstand admission is $25 for adults and $20 for students. Pit passes are $35.