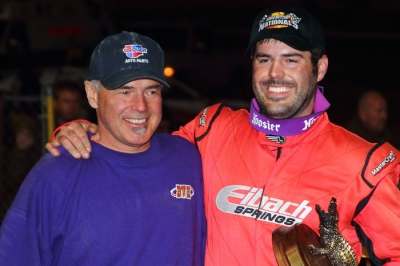 Billy Moyer (left) with his namesake son in February. (heathlawsonphotos.com)

While Eldora Speedway forces trials and tribulations on the hundreds of drivers who have entered the World 100 over the past 45 years, race winners have soaked up the glories of winning Dirt Late Model racing’s biggest event.

None more often than 58-year-old Billy Moyer of Batesville, Ark., the six-time World 100 winner who will likely make his last run the Big E this weekend. | Complete World 100 coverage

“There are just a lot of good times and memories,” said Moyer, whose most recent World 100 victory came with a 23rd-to-first charge in 2010.

Moyer, an iconic figure in the sport’s storied history, will seek his seventh title this weekend in the 46th running of the World 100. Moyer’s first globe-grabbing victory came in 1991 and he says this one may be his last attempt.

“I think this will be the best one yet to tell you the truth,” said Moyer, who also won in ’93, ’94, ’98 and ‘00. “You never forget them. Since I won my first one and through all of them, you just work your butt off to try and win the race. Then you go to the next one. Now that I’m slowing down, it would probably mean even more just to be able to do it one more time.”

Not only will fans have the opportunity to relive the wistfulness of each of his World 100 victories, but they will also be in attendance for an extension onto his legacy — a legacy that is timeless, yet at the same time generational. His 28-year-old son, Billy Moyer Jr., will be able to race alongside his father one more time in the sport’s most prestigious event.

“You know, a lot of times there are 60-80 cars at some of these places, and we sometimes have the same heat race side-by-side,” said Moyer, chuckling at the irony. “It’s kind of funny. Now that I’m saying it, it’s probably going to happen here.”

Junior was there when his father overcame the odds in 2010 — the year his father completed Eldora’s Dream-World sweep for the second time — emphatically motioning lapped traffic to get out of his dad’s way in the closing laps.

The younger Moyer says it’ll be difficult to imagine the sport without his father behind the wheel.

“He’s been doing it for forever, and he’s ready to relax a little bit,” he said. “It’s surreal. It’s different. I don’t know. I wish it wasn’t (over), but he’s not just going to ride off into the sunset and never come back.”

The elder Moyer first started racing in 1977 and has since amassed 814 career feature wins. Being one of the original members of the World of Outlaws Craftsman Late Model Series in 1988, he won the inaugural championship and two more thereafter. Junior currently competes in the series full time and is in the position to capture the tour’s Rookie of the Year honors. He has two 2016 victories, including one Saturday at Selinsgrove (Pa.) Speedway.

To Moyer, 800-plus wins and six World 100 victories are still unparalleled to the feeling he gets when his son rolls into victory lane.

“That does something to you,” Moyer said. “It’s hard to explain to you just watching him — especially when he does well. When he’s happy, smiling and everything, it just makes me happier than anything like it was myself I guess.”

Junior is right: his dad is not leaving the sport entirely though he will tell you that “you’re either in or you’re out.” Even when asked about his retirement plans, Moyer has a predictable answer to the avid race fan. He will continue to drive machines country-wide and travel – this time at his own leisure. Moreover, he plans to help his son and other customers through his chassis company, Billy Moyer Victory Race Cars, in partnership with his uncle Carl Moyer in Des Moines, Iowa.

“I live, eat and breathe this stuff,” Moyer said. “It’s a lot of windshield time and you miss a lot of life driving down the road all the time, but building cars is something I’ve been wanting to do. Now that I’m doing it, it’s something to be proud of. I should’ve started doing it 10 years ago.”

With Moyer’s potential final World 100 appearance in the offing, fans are preparing to give him the ultimate sendoff. Fans will be packing the stands — typical for Eldora’s largest event of the year — but this time to witness Moyer run 100 laps at Eldora one last time.

“You never forget them. Since I won my first one and through all of them, you just work your butt off to try and win the race. Then you go to the next one. Now that I’m slowing down, it would probably mean even more just to be able to do it one more time.”