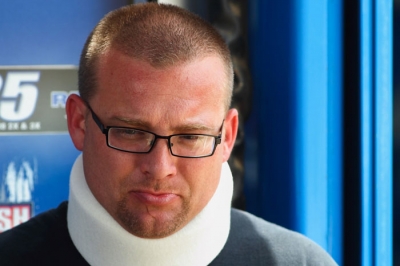 Missing action at Eldora Speedway’s Dream XXII wasn't easy for Duane Chamberlain. In fact, it’s one of the hardest decisions the Richmond, Ind., driver has made during 20-plus years of racing. | Complete World 100 coverage

Dealing with a neck injury that left him experiencing headaches and other discomforts, the 37-year-old racer was hampered at the Rossburg, Ohio, oval’s crown jewel in June because of nagging pain that forced him to seek medical attention in the middle of the three-race weekend.

Chamberlain has bounced back since that June weekend, clicking off strong finishes throughout the summer, including weekly victories at Moler Raceway Park in Williamsburg, Ohio, and Atomic Speedway near Chillicothe, Ohio. As September rolls around, Chamberlain is still trying to sort out the pain in his neck, but he’s ready to return to Eldora, setting his sights on the 46th annual World 100 starting lineup.

“I’ve got some head and neck issues I’m still dealing with,” Chamberlain said after Saturday’s Lucas Oil Series-sanctioned Whiskey City 60 at Lawrenceburg (Ind.) Speedway. “I’m actually in a lot of pain right now and probably shouldn’t be here. But I’m seeing neurologists and physical therapists … I’ve just got some pinched nerves and muscle issues in my neck. We’re just trying to work through that. I need to stay off that cushion is what I need to do. But we’re dealing with it and getting a little bit better at a time. I should be good to go for the World 100.”

Making multiple trips famed racetrack each season, Chamberlain is among the crowd of drivers considered Eldora regulars. He’s had past success at the speedway, with two of his five career Sunoco American Late Model Series victories coming at the half-mile oval founded by Earl Baltes and owned by Tony Stewart. The most recent of those ALMS triumphs came back in April, making his health issues at the Dream that much more difficult.

“That was one of the hardest things I’ve had to do racing-wise,” Chamberlain said. “I’ve been racing go-karts since I was 10 years old, so I grew up at a racetrack and it’s something I’ve always done. I’ve never had a heath issue keep me from racing. It’s very tough and it’s been tough all summer. I’ve been struggling with it. I’m young enough that I don’t want to damage myself for life. If I need to miss a few races now to be able to race next year, that’s what I need to do.”

Climbing back behind the wheel the following weekend, Chamberlain posted a runner-up finish in June 18’s events at Atomic. He’s picked up two victories since, as well as multiple top-10 finishes in July’s Buckeye Late Model Dirt Week tour.

“We’ve had a very hit-and-miss year,” Chamberlain said. “I’ve won a few races and definitely had some good runs. But then at the same time, I’ve been a 10th- or 12th-place car. We’re trying to fix that consistency and do a better job … just try to figure out how to be more consistent.”

Make no mistake, Chamberlain is still racing through the neck pain that arrived in the spring. He’s trying his best to push through it. While he can tell a difference in his on-track performance, he’s hopeful that he’ll be a World 100 contender.

“It just matters,” Chamberlain said of the pain. “I don’t think Eldora will be as bad. It will slicken up. Hopefully it will be a little bit easier on me … it’s just track conditions.”

After all, Chamberlain considers Eldora home. Just a short drive from his Indiana residence, the racetrack is also near long-time sponsor St. Henry Nite Club.

“Eldora is kind of my home track,” Chamberlain said. “I’m only 45 minutes from there. I enjoy going there and my car owner, that’s definitely his home track. I always want to run good there for him. We just look forward to every time they race.”

Chamberlain has made the World 100 starting lineup just once, qualifying for the sport’s most prestigious event in 2013. Putting the bad luck of seasons past behind him, Chamberlain is ready to give it another shot next weekend.

“It seems like I’m always one or two cars shy and something always happens,” Chamberlain said. “It’s just frustrating. I don’t let it get to me. You’ve just got to push harder every year, make sure all your ducks are in a row and go in with a clean slate and do your best.”

"I’ve never had a heath issue keep me from racing. It’s very tough and it’s been tough all summer. I’ve been struggling with it. I’m young enough that I don’t want to damage myself for life. If I need to miss a few races now to be able to race next year, that’s what I need to do.”