From staff, series and correspondent reports 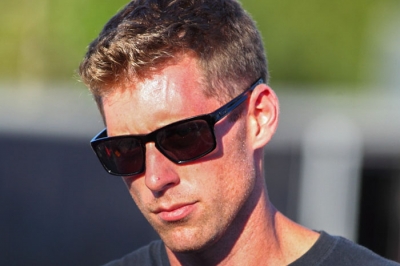 As the Lucas Oil Series invaded Ponderosa Speedway in Junction City, Ky., and Lawrenceburg (Ind.) Speedway over the weekend, there was one driver turning heads and leaving local fans asking the question, “Who’s driving the No. 1 car?”

That driver was Jared Hawkins of Fairmont, W.Va. Climbing behind the wheel of the Eric Hudkins-owned Bloomquist car previously driven by Paul Wilmoth Jr. of Clarksburg, W.Va., Hawkins shined throughout the Lucas Oil-sanctioned weekend. Starting on the front row of Friday’s Ponderosa event, the West Virginia driver was well on his way to a top-five finish before losing a wheel to draw a late-race caution. He was among frontrunners again Saturday at Lawrenceburg, but would eventually be among early retirees in the night’s race of attrition. But contending against some of the sport’s best is still a big boost for Hawkins and his new team.

“Especially with these guys,” Hawkins said of the national tour’s drivers. "Just to be running up front like that builds our confidence.”

Since pairing up a few weeks ago, Hawkins and the Hudkins-owned team have already found success. Capturing the Bud Weigle Memorial at Tyler County Speedway in Middlebourne, W.Va., on July 30, the Hawkins backed it up with another victory at the West Virginia oval on Aug. 20, locking himself into the upcoming Hillbilly 100.

“About four weeks ago (Hudkins) called me and we went and ran our local track Tyler County,” Hawkins said. "We planned on doing some other ones, but the rain’s been fighting us. But hopefully we can just keep going and keep building.

“Eric, he’s definitely hands on. He gets in there and makes changes. I’ve never had a car owner do that. I get out of the car and he wants to know exactly what I’m feeling and he seems really, really smart with the car. That’s going to help me too, so I’m looking forward to it.”

With the $25,000-to-win Hillbilly 100 returning to Tyler County, Hawkins is looking forward to the coming weekend. Running well in one of his home-state’s biggest events would be a major accomplishment.

“It’s definitely one I want to get there, one I grew up watching around the track and even down at Pennsboro,” Hawkins said. "It’s one I want to put my name on. Hopefully we can get ready for (Sunday) and be a contender in that.” — Alli Collis

South Dakota drivers make up seven of 16 spots for the AFCO Race of Champions, the Sept. 15 event that’s part of the Speedway Motors WISSOTA 100 weekend at Dakota State Fair Speedway in Huron, S.D.

AFCO, the parent company of Dynatech Headers and Pro Shocks, is title sponsor of the event for the second straight season. The Late Model event comes two nights before the $10,000-to-win WISSOTA finale for the division. — WISSOTA reports

Eric Cooley of Fulton, Miss., has won plenty of races in Mississippi and beyond in a variety of Late Model divisions, but his resume had a glaring hole on it for a driver from the Magnolia State. Entering the 2016 season, he was winless on the Mississippi State Championship Challenge Series.

Cooley finally got over the hump Saturday at Magnolia Motor Speedway in Columbus, Miss., taking the lead on the 22nd lap and grabbing a $2,500 victory.

“This win has been a long-time coming,” an elated Cooley said. “I feel like I’ve finished second more than a hundred times with the State Series, but I’ve never been able to seal the deal until tonight. It feels so good. I can’t thank God and my crew enough!”

Cooley started on the pole but slipped back to third before coming alive on a restart to take command. He took the checkers ahead of Dane Dacus of Arlington, Tenn., Jimmy Cliburn of Star, Miss., Dylan Ames of Harvest, Ala., and Jason Hiett of Oxford, Ala.

“I definitely want to dedicate this win to one of my car owners, Tonya Bryson,” Cooley said in a team release. “Her mom passed away on Friday night, and my heart is aching for her, so this win goes out to Tonya and her entire family during their trying times.”

In finishing fourth, Ames posted his ninth top-five finish of the season, but it didn’t appear likely early in the evening at the 3/8-mile Mag oval. Ames lost first gear in his transmission during hot laps, then was only ninth fastest in his time-trial group.

After his team swapped transmissions before the main event, Ames rallied from his 14th starting spot to a solid fourth-place finish.

“We definitely had some curveballs thrown at us early in the night, but my team never batted an eye, and we recovered to have a great finish,” Ames said. “That gives me some confidence heading to Eldora Speedway for the World 100. I’ve always wanted to go there. I’ve only seen the place on videos, so I’m really excited to go there and race.” — Ben Shelton

A pair of racing icons will be remembered this weekend when the Lucas Oil Midwest LateModel Racing Association swings into action with Friday’s Clyde Ellis Memorial at Lakeside Speedway in Kansas City, Kan., and Saturday’s Larry Phillips Memorial at Lucas Oil Speedway in Wheatland, Mo.

In Kansas City racing circles, few names in racing loom larger than Clyde Ellis. The late owner of Seeburg Muffler was held in the highest regard around the area and beyond after numerous contributions to racing.

"There are a lot of things we would not have in the Kansas City area without Clyde's generosity,” said journalist Kirk Elliott of the Racin' Boys. “I'm not real sure Lakeside Speedway would exist today without him. When the old track closed in 1998, he was instrumental in opening the current facility.

“Clyde was a stabilizing force for the track early on, and a major figure in racing during his lifetime. Clyde was also special for the way he went about his business. He did a lot behind the scenes and never asked for a return.”

At Wheatland, MLRA will remember and pay tribute to one of the best short-track racers in history. The accomplishments of Phillips came at a range of tracks across the entire country during a career on dirt and asphalt that led to an unprecedented five NASCAR Weekly Racing Series titles.

Terry Brumley of Rogersville, Mo., raced against Larry Phillips and worked for him for nearly a decade, while running a car he owned two of those years.

"Larry was like a big brother to me," said Brumley, a 2009 inductee into the Ozarks Area Racers Association Hall of Fame. "When I worked for him, through most of the seventies, he expected eight hours work for eight hours pay.

“Larry was always thinking about how to make his car faster. When I raced for him we were always running two totally different setups at the same track, just to try and learn something to get better. Larry was one of the five most driven people I've ever been around in racing."

Brumley readily admits it was not always chipper around the shop, especially when he got the best of Phillips on a given weekend.

"When I was running for him we were really pretty even. There were plenty of times after I won, it was a challenge for me to go work in his shop the following Monday!”