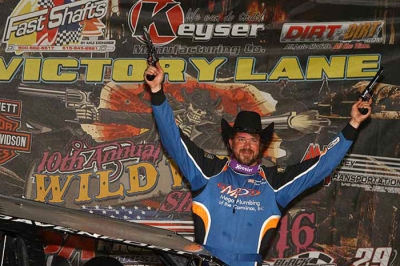 The Keyser Manufacturing Wild West Shootout has already attracted some of the biggest names in Dirt Late Model racing. Now miniseries promoters Chris Kearns and Kevin Montgomery hope to keep those same big name drivers — and others — flocking to the Arizona desert each January.

As he continues to promote the Wild West Shootout as a must-see event, Kearns is making changes to make the mid-winter meet that’s moving to Phoenix-area Arizona Speedway more attractive to racers.

For the first time in its history, drivers at the Wild West Shootout will qualify for their heat race starting position and then race for their respective starting spot on the feature grid rather than use a passing points system.

Last year it was dollar signs that grabbed headlines, as an increase in purse money and the creation of the Keyser Manufacturing Quarter-Million Challenge made a trip to the desert seem every bit as fun as panning for gold.

When Kearns announced that title sponsor Keyser Manufacturing was offering up a bonus program that would pay a driver $250,000 if he managed to sweep all six nights of the miniseries, drivers took notice. And if no driver managed to get out the broom, no worries, an added incentive provided a $100,000 bonus for winning five of the six features and a $50,000 bonus for capturing four main events.

Jonathan Davenport came oh so close to collecting the $50,000 bonus by winning half of the six features during his nine-day stay in Arizona.

While Kearns recently announced that Keyser is back on board and the bonus money is still in place, he continues tweaking Arizona's long-running Super Late Model event.

Kearns hopes his latest change will put his event in line with similar formats used in the sport’s two national touring series. Knowing that the week-long average of 57 entrants per night during the 2016 event set the bar high, Kearns hopes scrapping the passing-points system will attract some drivers who have stayed away.

“I think it’ll bring in more national stars going to the qualifying format. It seems to be more along the lines of what they’re used to,” he said. “No racer has ever told me they were definitely going to come because we were doing passing points, but I’ve had some racers tell us they weren’t coming if it wasn’t qualifying, especially the big name drivers. We’ve gotten to a point where there’s a lot of big-name drivers coming out here, so it felt like the right thing to do.”

The passing-points format awards more points to drivers who pass more cars in their heat race, relative to starting position. In a sense, it allowed drivers to determine their own destiny. But drivers winning from the pole of a heat often don’t have the best chance of a front-row starting spot in the feature.

Though fans may love the action, many drivers balk at the mention of an event based on passing points. Unlike some of the other big-money races that have adopted a passing-points format recently — like the Silver Dollar Nationals at I-80 Speedway, the North-South 100 at Florence Speedway and most recently the 2015 Dirt Track World Championship — the Wild West Shootout is six completely separate one-night events.

“In my opinion, there are too many good cars out there for passing points. They have a good thing out there. They keep bumping the purse up and I think Chris is really about the racers. I think there a lot of promoters out there who aren’t.”

Moyer added that because of the continued growth of the six-race miniseries, scrapping the passing points system in favor of qualifying was simply the right thing to do.

“There are just too many good cars out there now for passing points,” said Moyer, who recorded two top-10s and a best finish of fourth in four feature starts during this year’s WWS. “You go back four years ago when there were seven good cars out there … and I’m not knocking anybody … but now you have (Moyer’s Hall of Fame father, Billy Moyer) and (Shane) Clanton and (Jimmy) Mars. You have (Terry) Phillips, (Don) O’Neal, (Steve) Francis, (Darrell) Lanigan and myself. There’s 14 for 15 that can win the race.

“Five years ago there were four or five good cars and then four or five more who could win as well. Now, when you get in that stacked heat race and you run your balls off to get to fifth from ninth and you’re still in the B-main, it’s tough. When you qualify, you hold your own fate. I have qualified good and pushed and finished last, and that’s my own fault.

In the last two years — a span of 12 races — the Wild West Shootout has seen five different winners, with Davenport, of Blairsville, Ga., and Darrel Lanigan, of Union, Ky., winning three apiece. Indiana native Don O’Neal and Tennessean Jimmy Owens have two victories each, while Tony Jackson Jr., Lebanon, Mo., and Rodney Sanders of Happy, Texas, each have one win.

Sanders is no stranger to passing points. Racing both a Late Model and an open-wheel modified, the 26-year-old driver comes across a number of qualifying formats and has to adjust likewise.

“I do think (time trials) is better, just because if you are fast you are kind of rewarded. If you qualify bad, that’s kind of your (own fault). It just seems like there isn’t as much work involved.”

Sanders pulled double duty during the 2016 Wild West Shootout. In his Late Model, he was fast enough to race his way into the show all six nights, recording three top-10 finishes along the way. His best finish was a seventh-place on the fourth night of action. In four nights of running his modified, Sanders notched a pair of runner-up finishes.

When it comes to putting on a show for the fans, both Moyer and Sanders are in agreement.

“I do have to say this. Some of the fans like the passing points, and we have to put on a show for the fans,” Moyer said. “But I think they will like to see the best six cars starting in the front three rows and duking it out. Now I feel like that’s what they’ll get to see. I think the fans will see a good show.”

“I kinda agree with that,” Sanders said. “A lot of times you may have the fast guys up front. I think you would rather have them up front putting on a good race than have maybe just one or two guys coming from the back.”

It’s hard to top an event that averaged nearly 60 cars each night and continues to pick up steam, but Kearns is always eyeing improvement. From the addition of the Keyser Manufacturing Quarter-Million Challenge last year, to the move to a more stable facility this year, and even the switch from passing points to qualifying, Kearns and Montgomery are doing what they can to enhance the experience both on and off the track.

“I think now, with Kevin and I promoting it and the stability we’re trying to bring to it, I definitely think it will continue to grow,” Kearns said. “We’re expecting it to be even bigger. Most of the drivers that came out this year have told us they plan to come back, and we’re expecting some others to join them. We expect another great turnout.

“We’re going to keep doing our best to do things right and make it better each year.”

The 2017 Keyser Manufacturing Wild West Shootout kicks off Jan. 7 with the next two events Jan. 8 and Jan. 11. The miniseries finishes with three straight nights of action Jan. 13-15, leaving a handful of off days in between for drivers and fans alike to take in the sites or recharge their batteries. For more information, visit

“I think it’ll bring in more national stars going to the qualifying format. It seems to be more along the lines of what they’re used to. No racer has ever told me they were definitely going to come because we were doing passing points, but I’ve had some racers tell us they weren’t coming if it wasn’t qualifying, especially the big name drivers."