Babb slips back at I-80, but he remains upbeat 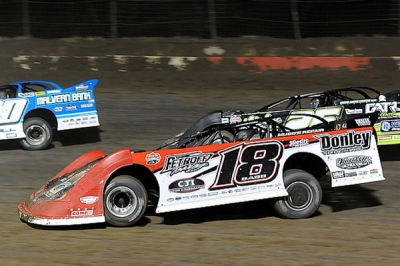 GREENWOOD, Neb. (July 23) — Sixth place in Saturday night’s sixth annual Silver Dollar Nationals at I-80 Speedway wasn’t quite the finish Shannon Babb wanted — especially after he charged forward from the 18th starting spot to run as high as third late in the 80-lap feature.

But amid an uncharacteristically winless 2016 season in which he failed to capture at least one UMP DIRTcar Summernationals race for the first time since 2008, the 42-year-old star from Moweaqua, Ill., was surprisingly upbeat following the $40,000-to-win Lucas Oil Late Model Dirt Series event. Despite losing two positions following a final caution period on lap 78, he found an encouraging aspect to his performance.

“I guess we were fortunate enough to get up there and get racing,” Babb said after loading up his familiar No. 18 machine. “I wish we wouldn’t have (lost two spots late), but that’s the way it goes sometimes.”

Driving the same Club 29 Race Car he rolled slowly in the July 7 Summernationals-sanctioned Herald & Review 100 at Macon (Ill.) Speedway (it basically needed only new bodywork), Babb looked as strong as he has during a campaign that had seen him make 28 starts before I-80 but register a mere five top-five finishes. He chugged dutifully along on the bottom of the 4/10-mile oval to move into contention, reaching third on lap 67 and sitting fourth when the caution flag flew on lap 78.

That’s when Babb ran into some trouble. His bid to overtake Tim McCreadie of Watertown, N.Y., for third when the green flag flew resulted in contact that broke both his and McCreadie’s momentum, allowing Brandon Sheppard of New Berlin, Ill., to sail by on the outside to finish third and leaving McCreadie fourth and Babb sixth in the final rundown.

“We didn’t need that last restart,” said Babb, whose best finish in 2016 is fourth, on March 26 at La Salle (Ill.) Speedway and May 26 at Lucas Oil Speedway in Wheatland, Mo. “We went down in turn one … I guess me and Timmy had been racing earlier but he was behind me, so when he got ahead of me on that restart and I went down the bottom under him and he diamonded (the corners) it took me by surprise. He kind of come down and parked in front of me and I wasn’t expecting that. I run right into him and knocked us both sideways and we lost a couple spots.

“Then I thought, Well, all right, and we come down this end (motioning to turns three and four) and I was like, ’S---!’ We did the same thing again! I wasn’t expecting it again.

“It was my fault,” he added. “I’m kind of bummed out that we were in third and we ended up sixth, but it’s part of it.”

For observers accustomed to watching Babb pound the cushion, he used a decidedly more conservative approach at I-80. He barely ever came off the hub — though he wondered if perhaps he should have let it hang out and rolled the top for the final circuits.

“The bottom was real good,” Babb said. “It had a lot of grip down there, and I just knew, with these long races, you better just stay down there and take care of your stuff. But maybe on that last restart … I was on the bottom, started down there, but maybe I should’ve just went up and momentumed it. But hell, I’d run every lap down there, so I just stuck with it.”

Babb departed I-80’s pit area happy that he decided to make his first-ever trip to the Silver Dollar Nationals. In fact, though he grew up running bullrings on the Summernationals trail, he’s finding that he likes tackling extra-distance races at longer, faster speedways more and more.

“I’m ready to get away from them quarter-miles,” Babb said. “I told everybody, by the end of July, it’s like a big weight has been lifted off my shoulders. Now I can race on these big racetracks. I don’t know if I’m getting older and just enjoy it more or what, but these long races on bigger racetracks are more enjoyable to me anymore. I have a lot of fun toward the end of the year running these kind of races.

“The small tracks are just brutal on your equipment. Back when the cars were $15,000 and you didn’t really care what they looked like, that was one thing. Now these cars are a hundred-grand and aerodynamics play a big role and spindles gotta be straight and your shocks are important, and, well, you go to those little tracks and beat the hell out it and you’re always behind. That’s kind of where we was at all summer. I’m about over that.”

Of course, there is a quarter-mile in Babb’s backyard that has a pretty big show on tap this weekend — Fairbury (Ill.) American Legion Speedway, which hosts the July 29-30 World of Outlaws Craftsman Late Model Series-sanctioned Prairie Dirt Classic paying $27,000 to win — but he doesn’t include it in the rough-and-tumble category.

“Fairbury is a little track, but it’s a clean-running, good little track,” said Babb, who scored a $20,000 triumph in the 2013 Prairie Dirt Classic. “I enjoy that racetrack. I’ve always enjoyed that place and felt confident when we’ve gone there no matter what we was doing, so after the way we ran this weekend I feel even better about going there.”

“The small tracks are just brutal on your equipment. Back when the cars were $15,000 and you didn’t really care what they looked like, that was one thing. ... You go to those little tracks and beat the hell out (your car) and you’re always behind. That’s kind of where we was at all summer. I’m about over that.”