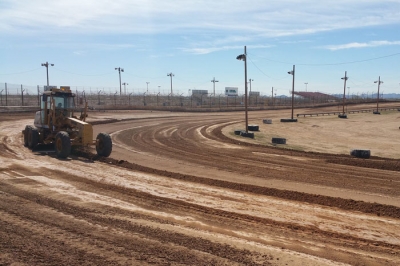 For the second straight year there will be a whopping $250,000 bonus on the line in Arizona this January. Keyser Manufacturing is back as the title sponsor of the 2017 Keyser Manufacturing Wild West Shootout and will again present the Keyser Quarter-Million Challenge as the desert miniseries moves to Arizona Speedway near Phoenix for six races between Jan. 7-15.

“Being the first major Late Model and modified event each year, the Wild West Shootout is the perfect opportunity to promote our brand in front of thousands of people,” said Keyser Manufacturing’s Scott Keyser. “We could think of no better way to reward the competitors than to offer them the chance at $250,000. It would be awesome if a driver walked away with one of the bonuses. It definitely gives them an extra incentive to participate in the Wild West Shootout.”

The lucrative bonus helps set the stage for another attractive trek west for Dirt Late Model teams and fans looking for offseason racing in a warm climate. The big difference this time around will be the stage on which the event will take place. Located to the southeast of Phoenix in the Queen Creek suburb, Arizona Speedway will host the Wild West Shootout for the first time in 2017 as the miniseries leaves USA Raceway after a six-season run at the Tucson oval.

The event will once again feature six nights of racing stretched over nine days with USRA-sanctioned open-wheel modifieds also in action. The first five nights of racing will each feature $5,000-to-win Late Model main events, while the finale on Jan. 15 will pay $12,000 to the feature winner, a $1,000 increase over the 2016 Wild West Shootout finale’s winner’s purse. DirtonDirt.com plans to provide live online pay-per-view coverage of all six nights of racing for the sixth straight year.

“The Wild West Shootout is already shaping up to be even better in 2017,” said Wild West Shootout co-promoter Chris Kearns. “Having Keyser back as the title sponsor and presenting the Quarter-Million Challenge is great opportunity for the racers and adds extra excitement for fans. And the move to Arizona Speedway is a huge change for the better for the Wild West Shootout going forward.”

Arizona Speedway promoter Jonah Trussell believes his track is an ideal location for one of Late Model racing’s most popular early-season events. The Wild West Shootout will be the track’s first high-profile Late Model event, but it has hosted a number of larger sprint car races, including its first World of Outlaws Craftsman Sprint Car Series event in March.

“We’re definitely excited and ready to host a Late Model event as big as the Wild West Shootout,” said Trussell, who’s in his seventh year operating Arizona Speedway. “I think the Late Model guys are going to really like this track. It’s a wide track with banking to provide good racing all across it. We don’t race a lot of Late Model shows on it, but we have really good sprint car racing and modified racing all the time. I know the Late Models will have some good racing on it as well.”

Kearns, who took over the Wild West Shootout with co-promoter Kevin Montgomery following the 2014 event, was pleased to land Arizona Speedway as the new Wild West Shootout host after leaving Tucson with uncertainty surrounding track management.

“I’ve talked to some of the guys that have raced (at Arizona Speedway) like Billy Moyer and Jimmy Mars, and they say it’s a very racy track for Late Models,” Kearns said. “It’s mostly been a sprint car track, and there’s been some incredible sprint car races there. The guys that prep Tucson are gonna be there prepping the track, and they do a phenomenal job. They know how to make a surface racy for Late Models.

“I’m hoping it’ll also help the crowds. There’s a lot more to do and see near Phoenix than Tucson. I think that’s more attractive for a week-long event, where people are also looking to enjoy their time away from the track.”

Along with the immediate benefits in the move to Arizona Speedway, Kearns hopes the Wild West Shootout’s new host will provide a stable home for the miniseries for years to come. The Wild West Shootout has flourished over its decade of existence even through periods of uncertainty surrounded the tracks hosting the event.

Beginning as a spinoff from Ernie Mincy’s Early Thaw Series that first popularized offseason Late Model racing in Arizona in the early 2000s, the Wild West Shootout was originally launched by promoter Benji Lyons at Central Arizona Raceway in the Casa Grande, Ariz., in 2006. The miniseries had a solid three-year run at Central Arizona with notable drivers like Billy Moyer of Batesville, Ark., and Jimmy Mars of Menomonie, Wis., helping to draw interest from the Dirt Late Model base back East.

The event hit a snag when Central Arizona Raceway closed midway through the 2008 season, forcing the Wild West Shootout to go on hiatus in 2009. A move to Tucson allowed the event to return with gusto in 2010.

With USA Raceway as its host and with DirtonDirt.com’s live pay-per-view coverage beginning in 2012, the Wild West Shootout thrived in Tucson. But the track has also been plagued with uncertainty following management changes of its own that eventually sent Kearns and Montgomery looking for a more stable host.

“That was obviously a major issue with Tucson; there was just no stability,” Kearns said. “That whole deal could be jerked out from under us at any point, and when you’re investing this kind of time and money and effort into an event, that’s a scary thought. Basically, this is something we work on all year long, and to come November or December and not be sure about the track situation, that uncertainty is just too difficult.

“The stability at Arizona Speedway is great. We know Jonah isn’t going anywhere. He’s been spending a lot upgrading the facility this year because he brought in a World of Outlaws (sprint car) race and he’s doing a three-day USAC race at the end of the year. It’s a good venue and a stable venue for us to really continue to grow the Wild West Shootout.”

The Wild West Shootout will also see a few other noteworthy changes in 2017, including a format adjustment that will feature time trials to determine heat race lineups instead of a draw and passing-points system. Kearns and Montgomery have also tabbed veteran series and race director Kelley Carlton and his KELCAR Motorsports team to oversee race directing and technical inspection duties. More information on the event format and rules will be released soon.

The 2017 Keyser Manufacturing Wild West Shootout will follow the event’s traditional schedule with back-to-back events opening the miniseries on Jan. 7-8. After a two nights off, action resumes with a mid-week event on Wednesday, Jan. 11. Following another night off on Jan. 12, the miniseries wraps up with three straight races Jan. 13-15. For more information, visit www.wildwestshootout.net.