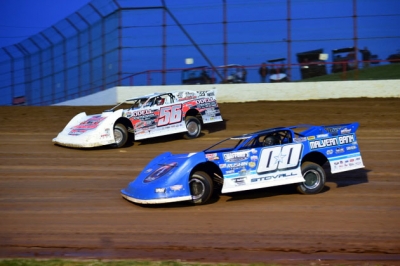 WHEATLAND, Mo. (May 28) — The leaders of the home-state gang in Saturday night’s 24th annual Show-Me 100 presented by ProtectTheHarvest.com at Lucas Oil Speedway didn’t start the crown jewel event as well as they did last year, but they sure finished it better.

Stovall, 35, of Billings, and Jackson, 34, of Lebanon, finished third and fifth, respectively, in the Show-Me 100, marking the first time that two Missouri drivers cracked the top five since the race’s birth in 1993 at West Plains Motor Speedway.

How the Show-Me State stars did it made their accomplishment even more impressive. One year after they shared the front row for the start of the Show-Me 100, they had to rally through the ultra-competitive field — Stovall from last because an unscheduled pit visit after reporting to the track for driver introductions forced him to relinquish his 24th starting spot, and Jackson from the mid-pack (15th).

Stovall actually — and improbably, since he seriously considered pulling out of the race early because of the rough track conditions — had a shot at winning the $30,000 top prize when he restarted second behind eventual victor Jimmy Owens of Newport, Tenn., on laps 91 and 98. He couldn’t keep pace with Owens, however, on lost the runner-up spot to Scott Bloomquist of Mooresburg, Tenn., on the final lap.

“I thought maybe I could do something with Jimmy, but we fired off there and I couldn’t fire off the bottom at all,” Stovall said. “That’s why I started on the top that last time (lap-98 restart).”

But as Stovall pointed out afterward, “All in all, it was just a wonderful night.” After failing to qualify for Thursday night’s preliminary feature and finishing a quiet 16th in Friday evening’s main event — and then transferring to the Show-Me 100 through a consolation race and having a pit stop for a left-rear suspension problem before the green flag push him even farther back in the lineup — claiming a $10,000 third-place check was certainly satisfying.

And surprising, of course. Stovall made no bones about that when DirtonDirt.com reporter Ben Shelton posed this question to him: “If I had told you earlier today, ‘You’re gonna get in the show, you’re gonna have to drop to the tail and you’re gonna get third,’ you would’ve said what?”

“Yeah, right,” Stovall said with a smile and a snicker. “That’s what I told them out there (before the race): ‘I don’t have a car to race through there. I’m gonna race and try this a little bit and pull off and get my money.’

“It’s one of them deals where you just keep riding around and riding around … I know this racetrack, I’ve been around it millions of laps. It’s just an awesome feeling to finally come through here, but I definitely wouldn’t have thought at the end of the day I would’ve come out of here third.”

Coming off a spectacular 19-victory 2016 season that included a career-best fifth-place finish in the rain-postponed Show-Me 100 (after he ran second for much of the distance), Stovall had designs on more than simply ending up on the event’s podium. But the way the weekend went changed his expectations. He struggled mightily to get his Black Diamond dialed in to the difficult 3/8-mile oval, commenting specifically on the great effort and thought process that he witnessed so many big teams putting into “getting around these racetracks” — an ongoing technological emphasis that he said he’s finding tough to match as a regional racer. So, in the final analysis, he was fine with earning the best Show-Me 100 finish ever by a Missouri driver not named Terry Phillips, the Springfield veteran who is the only home-state driver to win the race (1999 at West Plains) and also has a runner-up and two third-place finishes in the event.

“Honestly, I came here to win this race,” said Stovall, who has started the Show-Me 100 every year since it relocated in 2010 to Lucas Oil Speedway. “That’s what I said in some of the pre-race things before the race ever started.

“Come today, I’m wondering if I’m gonna get a provisional to get in the race, so now, just to get in the race, I was happy … but I was mad at the same time because I’m not here just to make this race, I’m here to win this race. It’s hometown, home-state deal, so I definitely want to be up front for my fans and my crowd. Fortunately, we got that done.”

Jackson, meanwhile, didn’t get quite as high in the running order as Stovall, but the asphalt Late Model convert enjoyed a noteworthy, career-best Show-Me 100 as well.

“To run from 15th to fifth, that’s more satisfying for me than starting on the pole all these years and running seventh or eighth or whatever,” said Jackson, whose best finish in four previous Show-Me 100 starts was eighth in 2013 (he finished ninth last year). “We just had a really good race car. It’s a big learning curve (with his change to Longhorn Chassis this season) — different shocks, different chassis — and we’re plucking along and trying to figure it out.”

Jackson surged into contention shortly before the race’s halfway mark, reaching fifth place on lap 37 with a pass of Moweaqua, Ill.’s Shannon Babb. He briefly ran fourth twice — just after the crossed flags were displayed and again after a lap-91 restart — but settled for a fifth-place finish worth $6,000.

Jackson, who has won the last three MARS DIRTcar Series championships, felt fortunate to survive a wild, physical race that was unlike most century grinds.

“It was a challenging track, but at the same time it made for good racing for the crowd I’m sure,” Jackson said. “A lot of 100-lap races, long races, you bide your time, save your tires, but I think that was 100 laps of everything you could get.”

“It’s one of them deals where you just keep riding around and riding around … I know this racetrack, I’ve been around it millions of laps. It’s just an awesome feeling to finally come through here, but I definitely wouldn’t have thought at the end of the day I would’ve come out of here third.”