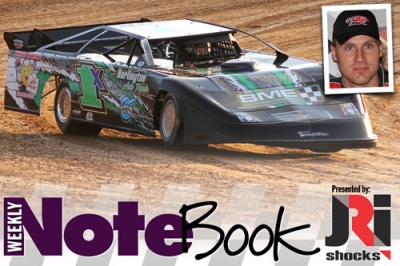 Aaron Marrant has watched the video replay multiple times and still marvels at how he prevailed Saturday in one of the closest finishes in Lucas Oil Speedway history.

"I've had a couple where I've been on the opposite end, where I got passed for a win coming off turn four," Marrant said. "But those weren't ever this close."

Marrant made a high-side pass of Justin Russell, with the two mixed in with slower traffic, and won by .0036 of a second at the Wheatland, Mo., oval. It was too close to call to the naked eye, a matter of an inch or two, and took the electronic scoring transponder to determine the winner.

Like the finish, it's been an eye-opening 2016 season for Marrant, a 30-year-old from Richmond, Mo., who finds himself atop DirtonDirt.com's Weekly Notebook presented by JRi Shocks. The victory was the third straight for the Late Model rookie in Lucas Cattle Co. United Late Model Association action.

Marrant is a long-time USRA modified competitor and continues to pull double duty. He's leading the Lucas Oil Speedway’s Late Model points by 11 over Larry Ferris of Nevada, Mo., and is the early leader in ULMA Hoosier Tire Rookie of the Year points.

Counting a Late Model feature win at Central Missouri Speedway on May 7, Marrant has four straight feature victories in the No. 1x car.

"It's pretty awesome," Marrant said of his winning streak. "I drove that car three times last year and, other than that, it's the only Late Model experience I have. I didn't really know what to expect (this season) but we're having pretty good luck so far.”

Kansas City-area car owners Bob Morton and Chris Ricketts approached Marrant in the off-season about driving the Late Model with an eye on the ULMA title. The sampling Marrant got in the car last fall, which included a victory at Lakeside Speedway, was enough to sell him on the idea.

Marrant continues to drive his No. 70 modified, which can make for hectic race nights, especially when the divisions are stacked back-to-back.

"But most of the time, I actually like it," he said. "I think it helps me out on the track, especially in the class that runs after the other. You learn a lot about the racetrack, about which line is working, where the grip is and where the little holes are. So I like running two classes. I think it helps me."

Marrant is eighth in modified points at Lucas Oil Speedway with a pair of top-five finishes. He said the difference in how the race cars handle isn’t a big deal.

"The Late Model seems to have more traction, which is natural with the bigger tires and body,” said Marrant, who credits crew chief Michael Meise with getting the Burlington Auto Repair and Unique Painting-sponsored car into shape. "But when the track gets slicked off, the Late Model doesn't have much traction, either. They're both a handful at times."

Now Marrant appears to be a serious contender in the ULMA division event though the initial 2016 result was ominous. "We were sitting pretty good to win that one, too," Marrant recalls.

But while weaving through lapped traffic, he got caught up in an accident not of his making and wound up 19th.

"We had some back luck that night, but we've turned it around seem to be going pretty good ever since," Marrant said. "Hopefully we can keep it up.” —  Lyndal Scranton

• Rallying from his 14th starting spot, Michael Lake of Uniontown, Pa., took the lead on the ninth lap en route to a May 13 victory at Dog Hollow Speedway in Strongstown, Pa.

• With his MLRA weekend rained out, Tad Pospisil of Norfolk, Neb., grabbed May 13-14 victories at I-80 Speedway in Greenwood, Neb., and his hometown Off Road Speedway.

First-time occurrence at the dirt track:

• Twin Cities Raceway Park in North Vernon, Ind., hopes to reopen June 11 after closing to make improvements, including the addition of aluminum bleachers in turn one. Other bleacher issues, painting projects and bathroom repairs are on the list at the Tom Wetherald-owned track.

• Wartburg (Tenn.) Speedway Late Model drivers will run for guaranteed $1,000-to-win purses beginning May 21. The track previously had alternate purses if divisions drew fewer than 12 cars ($750-to-win for Late Models), but switched to guaranteed purses after drivers voted 20-8 to increase pit admission $5 to $30 in exchange for scrapping the old purse system.

• The driver of a car in the pure stock division at Paducah (Ky.) International Raceway that struck and injured a volunteer track worker was charged with DUI and assault. Jason Wallace, 38, of Paducah was booked at the McCracken County Jail while David McCracken, 54, of Benton, Ky., was airlifted to a Nashville, Tenn., hospital with a broken leg. He was released Tuesday.

UMP DIRTcar (Super Late Models): Through May 8, McKay Wenger of Fairbury, Ill., tops the standings with 632 points over Rusty Schlenk (582) and Michael Kloos (571).

Sweeney Chevrolet RUSH (Crate Late Models): As of May 17, Mike Franklin of Stephens City, Va., tops the standings with 707 points over Ben Bowie and Darin Henderson who are tied with 702 points.

Paducah (Ky.) International Raceway (May 20): UMP DIRTcar Super Late Models make their first appearance of the season at the 3/8-mile oval; Crate Late Models and other regular divisions are also in action.

Farley (Iowa) Speedway (May 20): The first Tri-Track Challenge event of the seasons post a $2,000-to-win purse for IMCA-sanctioned Late Models; regular divisions are also in action.

Ponderosa Speedway, Junction City, Ky. (May 20): The Topless 40 for the Crate Late Model division pays $1,500-to-win; five other divisions including modifieds are also in action.

Fayetteville (N.C.) Motor Speedway (May 21): The Battle for Bragg Super Late Model event pays $4,000-to-win; Limited Late Models are among other divisions on the card.

Golden Isles Speedway, Brunswick, Ga. (May 21): The I-95 Toyota Challenge miniseries event pays $3,000-to-win for the Late Model division. Enduro cars are among other divisions in action.