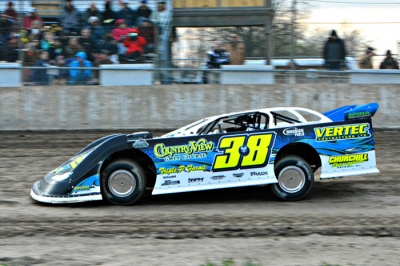 After a long and sometimes slow off-season, Canadian driver Jake Hooker hit full speed Saturday at Ontario’s South Buxton Raceway. In finishing fourth Saturday, however, Chatham-Kent teenager was behind the wheel of a car with significantly more power under the hood for 2016.

Hooker moved up to the UMP DIRTcar Super Late Model division at South Buxton from the track’s sport stock division for the 2016 season and following in the tire tracks of his father, Kirk Hooker, who raced Late Models both on dirt and asphalt.

“I’ve got racing fever. I’ve been drawing a lot of race cars in my notebook lately. I’m excited to move up in to the new class and see my new competitors,” said the 10th-grader at Ursuline College (The Pines) in Chatham.

The difference between the two cars is significant. His Super Late Model, a No. 38 sponsored by Country View Golf Course, Triple P Farms and Vertec Contractors, has nearly 850 horsepower under the hood compared to the 500 horsepower of his sport stock. And because the Late Model is 400 pounds lighter, it’s that much faster and more difficult to tame.

Hooker knows there will be bumps during his transition to dirt racing’s fastest stock car. He has an impressive support group to help him through the adjustment.

Besides his father, he'll lean heavily on advice and support from crew member Matt Wauthier and fellow driver Andrew Reaume, the first Canadian to qualify for Eldora Speedway’s prestigious World 100. His mother, Dianne, has also been there to provide support every step of the way.

“Obviously my dad, he’s been there through thick and thin,” Hooker said before South Buxton’s season opener. “Andrew has been a big help to me through sport stock and now in to Late Model. My crew guy Matt Wauthier raced Late Models. He talks to my dad and they figure out the best way to discuss stuff with me. I have good people around me.”

Despite the change in division, Hooker can still rely on experience he gained over his previous two seasons behind the wheel of a full-size stock car.

“The main things I learned in sport stock were car control, how to properly pass people and pickup points for the throttle,” Hooker said. “The pickup points are going to be different now, but at least I have a starting point. You learn how to be patient.”

The 15-year-old pilot knows he will also have to adapt to new drivers on track with him this season, but has been watching old races to get a feel for the competition. In doing so, Hooker has set expectations for his rookie Super Late Model season.

“I want to win two features this year and five heat races. We don’t want to set anything too big, but it’s something to focus on,” he said.

The team will concentrate its efforts on South Buxton in 2016 with a handful of trips south of the border on Hooker’s radar. And after an opening night where he started on the pole and led 10 laps before settling for fourth, he's anxious for his home track’s special events.

“I always like the memorial races and the Canadian Fall Shootout,” he said. “I’m looking forward to that one.”