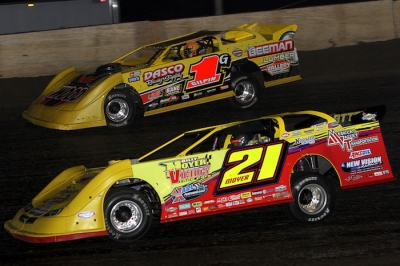 Billy Moyer is a native of Des Moines, Iowa, and has lived in Batesville, Ark., for over three decades, but there’s another place he wouldn’t have minded calling home.

While spending last weekend racing in Illinois — a successful trip that saw him win Friday night’s Douglas Dodge 40 at Farmer City Raceway and finish fifth in Saturday evening’s 50-lap FALS Frenzy at Fairbury American Legion Speedway — the 58-year-old Hall of Famer noted that through the years he’s often thought about the advantages residing in the Dirt Late Model-rich Land of Lincoln would have provided both him and his rising-star son Billy Jr.

“I like the Illinois area,” Moyer said after pocketing a $5,000 check at Farmer City to kick off a doubleheader co-sanctioned by the Sunoco America Late Model Series and MARS DIRTcar Series. “These two tracks have been really good for me, but there’s a lot of other good ones that are close to the area too. This is just the hotbed of Late Model racing — I’ve always said that. Starting in Missouri through the Illinois, Indiana area, all through the Midwest here, there’s a lot of good racetracks.

“I told Billy (Junior) several times I just wished we lived about six hours north of where we live. I think it would have sped up his career a lot more being able to maybe be running Pevely (Missouri’s Federated Auto Parts Raceway at I-55) and Granite City (Illinois’s Tri-City Speedway) and stuff like (Farmer City and FALS) a lot more on a weekly basis back in the day.”

The elder Moyer has, of course, enjoyed an immense amount of success across the Midwest throughout his spectacular career. In addition to being a six-time UMP DIRTcar Summernationals champion and sitting tied atop the Hell Tour’s all-time win list with Shannon Babb of Moweaqua, Ill., at 90 triumphs, Moyer has an especially strong resume at the two quarter-mile fairgrounds ovals that hosted last weekend’s twin bill, winning three Illini 100s and three Summernationals events at Farmer City and seven Hell Tour features and five Prairie Dirt Classics at Fairbury.

After his latest checkered flag at Farmer City, Moyer made it clear that he credits the knowledge he’s gained running at Midwestern bullrings like Farmer City and FALS with helping mold him into the transcendent talent he is.

“These tracks, like I tell everybody, they’re racy tracks,” Moyer said. “They start out one way and they end up the other … and like the Summernationals, all the success I’ve had on the Summernationals, that’s just taught me as a racer how to adjust your car for all the kind of racetracks. That’s what it’s about, and that’s what I’m trying to learn Billy … you know, you come to these places that start out with a cushion knee-deep and then at the end of the night you’re running around the infield. You gotta be able to know your car and have some stuff in the truck to throw at it because you can’t just unload and leave it alone.

“Once you learn all the right stuff to do, it just makes you a better racer.”

With 807 career wins to his credit since climbing into the cockpit in 1977, Moyer has certainly mastered the art of Dirt Late Model racing. His Farmer City victory and his strong outing at FALS — where he briefly challenged for the lead before the halfway point before sliding back after a restart — demonstrated that he still has plenty left on his fastball even as he’s supposedly cutting back his racing schedule after announcing last fall that he would no longer compete on a full-time basis.

And Moyer didn’t sound like a driver who plans to take it easy for the remainder of the 2016 campaign. He’s made seven starts (winning twice) since returning in early April from knee replacement surgery he underwent after sitting out Georgia-Florida Speedweeks to crew-chief for his son, and, when DirtonDirt.com’s Derek Kessinger mentioned to him at Farmer City that he’s “semi-retired,” the veteran chuckled.

“Well, yeah,” Moyer sheepishly said. “We’ll see. It’s hard to stay home, you know? I’m building these cars (Billy Moyer Victory Race Cars) and the R&D’s all on me, so I’m just trying to get the thing better. I can’t get it better just sitting at home looking at it, so we just gotta get out and race some more.

“I got some good customers out there helping me too … we’re definitely gaining on things. I’m real happy with the way Junior’s running and we’re running, and a lot of my customers are happy with everything so we just keep working that way.”

A week off from Lucas Oil Late Model Dirt Series competition came at the perfect time for Brandon Sheppard of New Berlin, Ill.

In need of some momentum heading into the heart of the national tour’s schedule, Sheppard got it with a three-race stretch of action close to home. The 23-year-old won his first-ever Lucas Oil Midwest LateModel Association-sanctioned feature last Thursday night at Lee County Speedway in Donnellson, Iowa, and backed it up with a runner-up finish Friday night at Farmer City and a fourth-place run Saturday evening at Fairbury.

How uplifting was the weekend for Sheppard and his Eric Brock-owned Best Performance Motorsports team? It was his first victory since becoming the Randall Edwards-wrenched operation’s full-time driver for 2016 (he did win a World Finals A-Main at The Dirt Track at Charlotte last November in a cameo with the team), and he had registered just a single top-five finish (fifth place in the April 16 Bad Boy 98 at Batesville Motor Speedway in Locust Grove, Ark.) in the two months of racing since the end of Georgia-Florida Speedweeks.

By no means has B-Shepp been far off the pace this spring — he ranks fifth in the Lucas Oil Series points standings, after all — but he hasn’t been satisfied with his overall performance.

“We’ve had a lot of solid runs but we just haven’t got a win yet,” Sheppard said after winning $3,000 at Lee County. “They say the first one’s the hardest to get off your back on the year … we were real close the very first night out (during Speedweeks when he finished second in the Feb. 5 Lucas Oil Series opener at Golden Isles Speedway near Brunswick, Ga.) and just haven’t felt like we’ve had the car to be able to do it (since then). We talked to Mark Richards and Josh Richards and them guys over there at Rocket Chassis (in Shinnston, W.Va.) and they got us a little bit better this week, so we’re thankful for them guys.”

Sheppard was a contender with his Rocket XR1 machine at his two home-state tracks as well, leading more than half the feature at Farmer City and battling amongst the top five throughout the FALS headliner. Any suggestions that he’s been MIA since Speedweeks were dispelled as he revved up in advance of this weekend’s $50,000-to-win Lucas Oil-sanctioned Buckeye Nationals at Atomic Speedway in Alma, Ohio.

“We’ve been making gains on this car,” Sheppard said. “We’re getting better. I think we’re gonna have something for them here the last three-quarters of the year.”

Kevin Weaver of Gibson City, Ill., had some clear perspective on his third-place run in last Friday night’s feature at Farmer City.

“I’m happy to finish third,” Weaver said. “I thought we might slip into second there toward the end, but all in all it was a good night for us — especially after last week tumbling through the air. It was quite exciting.”

Indeed, the 53-year-old veteran went from ending up on his lid in an April 29 regular-show start behind the wheel of buddy Jay Morris’s Longhorn car at Farmer City to securing a podium finish with his own Jimmy John’s-sponsored Pierce machine. He battled Sheppard for second late in the 40-lapper before settling for third in a race that got his blood pumping.

“Even though the track was maybe one-lane it looked like, there was still some passing out there,” Weaver said. “It was overall a pretty good track. It’s been really, really fast (at Farmer City), but (Friday) was a little bit slicker. It picked up a little bit of rubber, but I still think it was a pretty exciting race. Second, third and fourth there (Sheppard, Weaver and Dennis Erb Jr. of Carpentersville, Ill.), that was damn exciting … I don’t know about Moyer up there cruising around, but it was a good night.”

The outing also had Weaver primed to chase Saturday night’s $10,000 prize at Fairbury, where he scored an April 23 opening-night victory. He was never a factor, however, going a lap down early and then running into trouble at the halfway point when he had his car’s top radiator hose blow off entering turn three, spewing moisture onto his right-front tire that caused him to hit the wall and sweep up fourth-running Jason Feger of Bloomington, Ill., whose car rolled onto its roof to bring out a red flag.

The flip that ended Jason Feger’s promising run at Fairbury fortunately wasn’t damaging to him (he was fine) nor the older green-chassis Hustler car he ran (it basically only sustained some body damage). As for his racing plans this weekend, he indicated he’s leaning toward entering a $2,000-to-win show Friday at Tri-City Speedway and a $5,000-to-win event Saturday at Peoria (Ill.) Speedway rather than the big-money Buckeye Nationals at Atomic. … Bobby Pierce’s stirring FALS Frenzy triumph came in his first start at the track since last June’s Summernationals event; he was, you’ll recall, a very notable no-show for last July’s Prairie Dirt Classic at Fairbury. The 19-year-old from Oakwood, Ill., was asked after Saturday night’s action if he plans to compete in this year’s World of Outlaws Craftsman Late Model Series-sanctioned PDC scheduled for July 29-30 and he responded, “Yes.” … Earl Pearson Jr. of Jacksonville, Fla., rode a rollercoaster in his first 2016 weekend of action behind the wheel of Illinois team owner Larry Moring’s Black Diamond car. He sandwiched runner-up finishes on Thursday at Lee County and Saturday at FALS with a DNQ at Farmer City, which came after he spun in his heat and couldn’t rally to transfer through a B-Main. The Farmer City disappointment didn’t dull Pearson’s enjoyable weekend with Moring and Co., however. “We just race a couple times a year (together) and more or less have fun,” he said at FALS. “Even last night, that was my fault, but after all was said and done we were over there sitting and laughing about it.” … Shannon Babb’s early-season frustration continued on his home turf. After an early spin at Farmer City prompted him to retire (he finished 24th) and he placed ninth at Fairbury after charging from 16th to as high as fifth, he’s still stuck on just a single top-five finish in nine starts. He’ll look to turn the tide this weekend at Atomic, where he won the $50,000 Dirt Track World Championship in 2006. … Former UMP modified champion Devin Gilpin of Columbus, Ind., authored one of his best special-event runs in a Dirt Late Model at Farmer City, finishing fifth after spending the early portion of the feature in an experience-building battle for second with eventual winner Billy Moyer. … Jeremy Payne of Springfield, Mo., was the highest-finishing MARS regular in both events, placing 11th at Farmer City and seventh at FALS (after starting from the pole and leading laps 1-8).