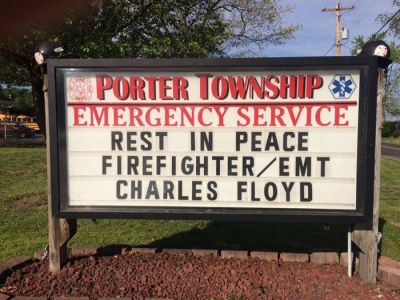 Appling, Floyd’s fellow EMT for Portsmouth Emergency Ambulance Service, laughs while remembering those comical moments when the Ohio racing buddies were the first one in the pits Friday afternoon at the Wheelersburg oval.

While that fateful night ended in tragedy when a devastating fire after a rollover accident left the 26-year-old Floyd with burns that eventually ended his life, Appling was glad to spend a few moments on the phone Wednesday remembering his friend instead of rehashing the accident he’ll never forget.

“This kind of brings a smile to your face,” said Appling, 33, while talking about Floyd’s passion for racing. “It’s kind of nice to talk about the good things he’s done.”

The Dirt Late Model world near and far is well aware of Floyd’s death some 72 hours after the accident, but Appling wants to make sure they remember the life of the dirt racer who was making just his fourth career Late Model start.

“I sit here and think about how good of a person Charlie was and just can't make sense of why something like this could happen to such a wonderful person,” Appling wrote on his Facebook page. “It hurts knowing how many people he touched in so many ways and knowing that they are suffering right now.”

Fund-raisers, benefits, prayers and touching remembrances came throughout the Tri-State dirt racing community for the young driver who left behind a fiancee and young son.

Veteran West Virginia racer Eddie Carrier Jr. and his wife Jamie on Monday visited Cabell Huntington (W.Va.) Hospital, where Floyd was flown after receiving initial treatment following the accident at Southern Ohio Medical Center in Portsmouth. While the Carriers didn’t know Floyd personally, they felt a calling to connect to a racing family that was hurting.

"The dirt family is kind of like a brotherhood. Even if we don’t know somebody or if we had hard times on the track and got into it, when tragedy happens we always try to take care of each other — at least I do,” Carrier said. “It don’t matter who it is, I try to step up and take care of somebody and support them when they’re fallen. It’s kind of like a fallen soldier for us.”

Floyd grew up racing go-karts and moved up to full-size cars in his early 20s, competing in the modified division for four seasons before running a limited Late Model schedule last year, Appling said. He was making his first start in 2016 at Southern Ohio, one of the tracks he frequented along with Portsmouth Raceway Park and Atomic Speedway near Chillicothe, Ohio.

"My heart hurts so badly for Charlie's family and friends. It hurts for all who were in attendance last Friday night,” said Donna Rayburn, promoter at Portsmouth Raceway Park. “I have struggled since the accident to come up with words, and there just are no words. Every weekend we go to a dirt track, somewhere, some town. We all live for the thrill of who will claim that checkered flag. Some say it's an addiction. I know that the racing family is one big family and how fortunate we are to be a part of such a wonderful family that is there for support during times of a tragedy.

“As the wife of a driver, and mother of a driver, and a friend to many drivers, we know the dangers, but rarely do we witness them. It is such a tragedy, and unfortunately, sometimes tragedies happen to wake us up. I am certain that all drivers, safety officials and tracks across the country have taken notice and are stepping up all safety aspects. I pray for the healing and comfort of all involved and can only hope that the family can find some peace in knowing he was doing what he loved to do.”

Ben Adkins of West Portsmouth, Ohio, didn’t know Floyd well, but he’d competed against him regularly at the Portsmouth oval. The accident was a scary reminder for all racers, he said.

“From the tragedy that’s happened, I’ve taken a look at my own racing and safety factors that go in to getting to the track and being there every week,” Adkins said. “It kind of makes you second-guess everything a little bit because things can happen. We’re in a pretty dangerous sport. It makes me question things that I’ve done and everyone else around me. It just kind of brings up a little more awareness to be more safe.”

Beyond racing, Floyd was a well-known and well-liked figure in the emergency services community, Appling said. Besides working as an EMT the last few years, Floyd was also a volunteer firefighter for the Porter Township Fire Department for eight years.

"He was a great kid. I’ve known him since he was a little kid. Everybody on the department loved him,” said Everett Hatfield, daytime supervisor at the fire department, which is helping spearhead fund-raisers for Floyd’s family. “He was a great jokester. Everybody was supportive of him when he started racing. It’s hard. He was a big part of this department, one of the young men stepping up. His loss will be greatly missed.”

Floyd had closer friends than Appling, but the two immediately connected by virtue of their jobs as EMTs and their love of dirt racing.

“Considering we share the same career, racing was his passion and was one thing among many that sparked our friendship and drew us close,” Appling said. “Charlie was a person you couldn't help but love being around. He was funny even when he was mad.”

Appling at one point owned the Rocket Chassis that Floyd drove at Southern Ohio Speedway, but he’d sold it to his friend when he didn’t have time to race it. Floyd drove it a few times in the 2015 season, including Portsmouth’s October finale.

But Floyd, whose father and other family members had worked with Wheelersburg’s famed Conley Racing team, was determined to do the best he could at the track.

“He was pretty much a one-man show. He did about 90 percent of the work on the car himself … he was one of the hardest workers I know,” Appling said. “He had ideas. He always wanted to try something different. He’d fiddle with the car a little bit and was always trying to make the car faster.”

On Friday at Southern Ohio, Floyd was making his first laps of the season and aiming to get faster. He changed suspension bars and tire pressures after hot laps to improve, Appling recalled, and was able to be competitive.

“It was a good day,” Appling said, his voice trailing off, “… up until the feature.”

A pileup out of turn four in the main event ended with Floyd’s No. 99F eventually rolling over, according to a track statement. A fire ignited and leaking fuel prevented the track’s safety crew from pulling Floyd from the car for five minutes, Appling said.

Being an emergency services technician didn’t make the scene any easier for Appling, who climbed aboard the ambulance to head for the Portsmouth hospital with Floyd.

“It was hard to watch,” he said. “It’s something I never want to do again. It was hard seeing him that way (at the hospital) and it’s hard to talk about, but I want people to remember Charlie in a positive way. … however they know Charlie is how they should remember him.”

And some fellow drivers may remember him as a helpful hand in the pit area.

“He was the kind of guy who if he saw you at the racetrack and saw you were struggling, he’d help you out,” Appling said in a phone interview. “He wasn’t afraid to get dirty … he’d give you the shirt off his back.”

“He was a very brave kid … as far as I’m concerned, he’s one of the best guys that I knew.”

Appling’s lengthy Facebook tribute was a moving piece of writing about his lost friend.

“Charlie is in a better place and finally finished suffering, but part of me can't help but think of how unfair it is. I just can't wrap my mind around it,” Appling wrote just a few hours after his friend’s death. “This has affected people across the country and if we learn anything from this we learn that life is fragile and everyone has a time.

“Charlie's time happened to come while he was doing what he loved. If anything we can take from this is that anything can happen to anyone. There is another plan for Charlie, but he sure is gonna be missed down here.”