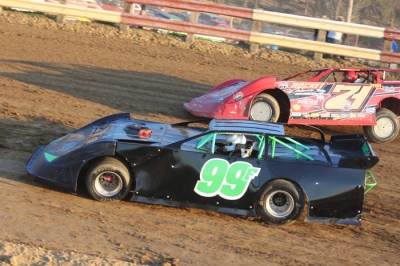 Floyd, a 26-year-old EMT and volunteer firefighter, was competing in the season opener at Southern Ohio Speedway when his No. 99F was involved in a pileup that saw Floyd’s car roll onto its side and then completely getting upside down, bursting into flames because of leaking fuel, according to a report from WSAZ.

Floyd was taken to Southern Ohio Medical Center in Portsmouth, Ohio, then flown to the Huntington hospital, where he was listed in critical condition with burns over 80 percent of his body. His death was reported Tuesday evening.

“It is with so much sadness that we have learned that Charlie has passed away,” the track’s Facebook page said. “There are no words to describe the amount of hurt that everyone in our racing community is feeling right now. Charlie Floyd will forever be in our hearts. Please pray for Charlie's fiance Quin, his son, his parents, all family members, and all friends. Rest in peace Charlie. ‪#‎99Forever‬.”

And outpouring of support from the Dirt Late Model near and far came on social media as fans shared photos, encouragement and monetary pledges to help pay medical expenses.

To donate to the account organized by a member of the Scioto County Sheriff Deputies, visit Go Fund Me. The site has raised nearly $10,000 as of Wednesday morning.

Floyd, who entered last season’s Dirt Track World Championship at Portsmouth (Ohio) Raceway Park driving a black No. 2C Late Model and in previous seasons competed in modifieds, entered his black No. 99F into Friday’s season opener at Wheelersburg, where the track was running AMRA-sanctioned Late Models for the first time.

Floyd was caught up in the accident at the top of the frontstretch and fire engulfed his car after hit rolled over completely, track publicist T.J. Layne told WSAZ, a Huntington television station.

The Minford (Ohio) Volunteer Fire Department, Life Medical response medics and Scioto County Sherriff Deputies assisted track officials at the wreck scene, trying to get Floyd out of the car.

“Leaking fuel that streamed steadily from the car’s fuel tank kept the blaze ignited and got the fire so large that it could not be controlled,” the track said in a statement.

The track asked everyone to keep Floyd and his loved ones in their prayers.

While the night’s racing was halted, along with the cancellation of April 22’s scheduled racing, some drivers donated all or a portion of their winnings to support for Floyd’s medical expenses. A benefit was scheduled for Portsmouth Raceway Park’s May 14 opener with the sales from racing collectibles along with plans to pass drivers’ helmets through the grandstands.

“We have not been able to stop thinking about Charlie and his family,” the Southern Ohio Speedway statement posted Monday evening said. “They are in our prayers constantly. Charlie is such a good person. Charlie is what dirt track racing is all about. He is a local hero, a firefighter and EMT who has worked hard to be able to field a Late Model. Please pray for Charlie and his family.”

Besides his fiancee Quin Rosenburg and son Liam, Charles William “Bub” Floyd II is survived by his mother and father, Charles and Maria Floyd and a sister, Jeweli (Chase) Mullikin.

Visitation begins at 10 a.m. Friday until 2 p.m. funeral services at the Swick-Bussa-Chamberlin Funeral Home in Wheelersburg with interment to follow in Clapboard Cemetery in Franklin Furnace. Visit swickbussachamberlin.com for the complete obituary.