From series, track and contributor reports 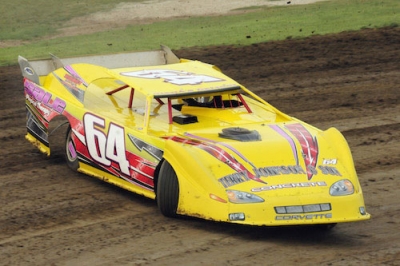 After months of planning and preparation, the new Oklahoma-based Sooner Late Model Series is ready to take the track on Friday as Southern Oklahoma Speedway in Ardmore hosts the new tour.

“I am real excited about the new series,” said Sale, a veteran modified and Late Model racer. “I plan on running all the shows but one. I have scheduling conflict but I plan on being at all the rest of them.

“It should be exciting. It is kind of a working man’s series. I think it has a lot of promise to offer. A lot of people want to run Late Model but they are expensive. This will give them an avenue to get out of a sport mod or modified and jump into a Late Model.”

Sale suffered injuries in a 2012 wreck in his first Late Model season, but also found plenty of success.

“I started in Late Models in 2012 at Ardmore. They had a limited late model series and we ran ten nights and won six or seven features. Then we got into a bad wreck. I lost my brakes and hit a monster track and got hurt. It broke my sternum and some ribs. I did not race anymore that year. I started back in 2013.”

He’s been spreading the word about the Sooner Series and hopes to see the series draw a good following of competitors in a state where the division has been thin in recent seasons.

“I think we have about 12-14 committed running the series,” he said. “I have six of my buddies that are running out of my shop with me. My two sons and driving also.

“We went to practice in Ada a couple of weeks ago and there was a couple of new Late Models down there. I know of four or five out of the Ada area.”

Two sprint divisions will also be on the card with Late Models Friday with gates opening at 5 p.m. and racing at 7:30 For more series information, visit soonerlatemodelseries.com. — John Rittenoure

The fans of the Lucas Oil Late Model Dirt Series can look forward to a young newcomer tackling the grueling demands of national tour racing in 2016.

“I'm looking forward to lots of seat time at all the different venues across the country this year,” the 21-year-old Flinner said. “It’s truly a dream come true for me, to be able to race against the best drivers in the country all year on the Lucas Oil tour. My goals for this year are: to learn a lot this season, become more and more competitive each week on the tour, and to have a lot of fun, all while building my knowledge base on what it's going to take for me to get to the next level.”

The tour’s Rookie of the Year awards include $10,000 cash and several contingency awards, while Hot Rod Processing posts $100 per race to the top rookie in each event.

Charlie Duncan of Millersburg, Ohio, plans to chase the Sweeney RUSH Series in 2016, continuing his expansion of Crate Late Model racing after a career in Super Late Models as a crew chief and driver.

"Last year we stayed at home,” Hall said. "This year he (Duncan) wanted to do some traveling and I agreed with him. As long as he drives the race car and the trailer, I'll just go along for the ride.”

The RUSH tour gets rolling with April 16 and April 22 events at Sharon Speedway in Hartford, Ohio (the first event is actually a makeup of the Apple Festival Nationals from last fall).

Duncan has enjoyed the switch to the more economical Crate Late Model class.

"It's more driver and setup than the motor you have,” he said. “I like the back-and-forth style of racing and the competition. The costs of open motors are out of hand. They need to put a limit on the cubic inch displacement. That should have happened years ago.”

Besides Duncan’s Super Late Model success going back more than 20 years, the driver known as Buckethead also worked as a mechanic for standout drivers including John Mason, Don Gross and Brad Malcuit, including seasons traveling on the old STARS circuit.

"When the Crates came along at Wayne County, I really wanted to run them,” Duncan said. "We had a Super Late car and another Rocket Chassis with no motor. Leroy and I really wanted to do this Crate deal. We didn't have the manpower for two Late Model cars, so I thought why not put Doug in the Super and I would drive the Crate. We share information on what we can do. We ran the same Rocket Chassis last year.”

Along with the RUSH tour schedule, Duncan plans on trying to repeat his Wayne County title. He’s anxious about Sharon’s April 16 tour event.

"I want to see how that first night goes,” he said. “I’m on the pole and then the next week, we'll start the touring series at Sharon and that will show how we stand up against the competition and what we need to do.

“I think I'm a good championship racer and I've always wanted to do a traveling series and I'm really looking forward to it.” — Doug Kennedy

With the Northwest’s new I-5 Super Late Model Series forming — mostly races at Willamette Speedway in Lebanon, Ore., with a few events at Cottage Grove and Sunset Speedway Park — Joey Tanner of Portland, Ore., is excited about the 23-race slate.

It will mark the the first time that Tanner has followed a regularly touring series since 2011 with the Northwest Extreme Late Model Series for Crate Late Models.

“I’m really excited to see an open Late Model series back and running,” Tanner said. “I ran the old Pacific Extreme deal when I was 15 and then ran with the Crate deal for a while, too. The Northwest needs this and it should help Late Model racing as a whole.”

Tanner was the Rookie of the Year award with the now-defunct Pacific Coast Extreme Dirt Late Model Series back in 2004 and runner-up with another organization, the Warriors on Dirt, in 2009.

Because his own powerplant isn’t quite ready, Tanner plans to start the I-5 tour in a Dave Walters-owned car, and he’s planning for other racing opportunities in 2016.

“I’m not quite sure what I’ll be doing on the off weekends this year,” He said. “Jerry Schram let me drive his Modified a few weeks ago up in Yakima so hopefully I’ll get another opportunity at some point.” — Ben Deatherage