Richards shifts his focus from ARCA to World 100 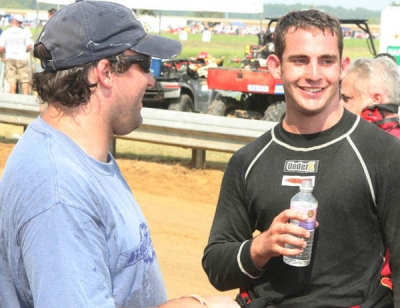 ROSSBURG, Ohio (Sept. 5) — It's no secret that World of Outlaws Late Model Series standout Josh Richards has aspirations of being a big-time asphalt racer some day. Funny thing, though, that his first start for a major asphalt series came on a familiar surface: dirt.

Driving with car owner Tony Stewart spotting, the 19-year-old Richards posted a third-place finish in the Southern Illinois 100 at the DuQuoin (Ill.) State Fairgrounds on the ARCA RE/MAX Series.

"It was a great experience," said Richards from Eldora Speedway, where he'll run in the Sept. 7-8 World 100. "You never know going into that stuff how exactly it's going to pan out, and it went well. You never know what the future holds, and I'm not thinking about it too much. ... right now I'm focused on Eldora, but that was definitely a great first step."

Richards usually lends Stewart a hand when the two-time NASCAR champion runs his Dirt Late Model, but this time Stewart was helping Richards get acclimated to the heavier ARCA-style stock car.

"These cars are a lot slower than what I'm used to, you know, reacting and everything," Richards said after the race. "I just had to get used to slowing myself down and it took a few laps to do that."

Winning the ARCA event for the second straight time was Ken Schrader, a NASCAR veteran who knows a thing or two about dirt racing, too.

Scott James of Lawrenceburg, Ind., was among 69 drivers who ran at Eldora's Johnny Appleseed Classic on Sept. 2, a Sunoco American Late Model Series-sanctioned tuneup for the World 100.

His evening was over before the checkered flag fell on Jeep Van Wormer, but James saw it as a good omen for the $40,000-to-win World 100.

James has been in the mix at Eldora more than once in the past few years and would dearly like to be standing in victory lane Saturday night.

"I definitely want one of those globes," James said, "but to be honest, I don't even think I really know how much this race means to me because I've never won it. I guess. ... and I hope, we'll find out afterwards."

Durrett hoping for another highlight

Garrett Durrett of Simsboro, La., has struggled through most of 2007, but a bright spot was his 15th-place finish in the $100,000-to-win Dream on June 9 at Eldora. He's back for the World 100 and would love to be among the handful of drivers who qualify for both major events at Eldora this year.

"We qualified good here in June, and that's the key to this whole place," said Durrett, who runs as a teammate to Arkansas star Wendell Wallace. "If we can do that again this weekend, we should be in good shape, but that's always easier said than done here."

"I still get nervous here. ... I mean I think most people do. It's bigger, there's more people, and come Friday night when you're set for that first lap of qualifying, it's turnin' pretty good in your stomach. But once you're out there it's fine."

Chris Wall of Holden, La., hasn't had any trouble finding victory lane in Mississippi and Louisiana, but the defending champ on the Mississippi State Championship Challenge faces a whole new challenge with his first visit to Eldora.

"I'm a newcomer here. ... so I've just been told that the key is getting a good (parking) spot," the alligator farmer said with a laugh. "I'm not sure that actually matters, but I do know you need laps around here to be good, and I don't have any, so we'll see what happens. I know that we're honored to be here, and are just trying to make the show. I don't care if we finish 26th, we just want to get in."