Notes: Frost off to solid start at Clarksville 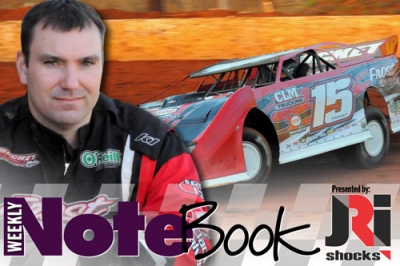 Hometown driver Richard Frost’s championship bid at Clarksville (Tenn.) Speedway was brought to an early end late last season when an eye infection landed him in the hospital. After leading the track’s points chase, the 37-year-old driver was sidelined from the final weeks of competition, finishing third in Clarksville’s 2015 Late Model points standings.

Healthy again, Frost is back behind the wheel this season. With just a handful of races behind him, the Tennessee driver has already found 2016 success, following up a top-10 finish in Clarksville’s Tuckasee Toilet Bowl Classic with two consecutive victories at the tight quarter-mile oval to land him atop the JRI Shocks-sponsored Weekly Notebook. And Frost is hoping this is only the beginning.

“We have certainly worked hard over the wintertime trying to prepare our car for another successful year,” Frost said. “We ended last year with seven wins and competed for a championship at Clarksville until I ended up in the hospital. So we worked hard to get our car ready to go this year. We opened up with the Toilet Bowl race and ran really well those two nights. And then the first two nights we came home with a victory. We’re looking forward to what this season’s got to offer.”

Frost kicked off his 2016 campaign at the beginning of March, entering Clarksville’s MARS-sanctioned Toilet Bowl. Qualifying well but hitting an infield tire during Friday’s heat race action, Frost settled for 23rd in the weekend opener. But the hometown driver rebounded with a sixth-place run in the Saturday finale won by Tony Jackson Jr. of Lebanon, Mo.

“With Clarksville being our home track, we tried to keep the momentum going with the big Hell Tour run that came through Clarksville last year,” Frost said. “I think we ending up finishing fourth with a good field of cars. We know the track very well and anytime Clarksville puts on a big race, we like to run well for the hometown guys. Same thing with the Toilet Bowl.”

Making the switch from a GRT Race Car to a Rocket Chassis last season, Frost closed 2015 with seven victories, all coming at Clarksville. Putting himself in a good position for the track title, Frost’s championship bid came up short.

“About the closing of our championship run, we were leading the points at Clarksville and I had a cellulitis infection under the right eye,” Frost said. “It appeared throughout the week and I wasn’t sure what and the world was going on there. I went into the emergency room and they admitted me that night.

“I ended up on some IV antibiotics for about three or four weeks. I became septic because some bacteria was found in the blood, so that kind of ruined my chances of winning the championship at Clarksville. But health is good, God is good and we’re back at it again.”

Following in the tire tracks of his father Gary, Frost has raced on and off for about 10 years, getting his racing start in 1997. Getting back in the drivers’ seat a few years ago, Frost has finished in the top-three of the UMP DIRTcar's South Region standings each season. But the Clarksville track title has proven elusive.

But Frost knows that success come from those you surround yourself with, attributing a large part of his solid start to the 2016 season to the help of his family and crew members.

“I have a phenomenal team underneath me,” Frost said. “I have great support. My dad has a number of years of racing experience. Then you take my brother, he’s also been in the seat of a Late Model too. With all the support that I’ve got, our program is good. We’ve got good equipment, we’ve got good motors and I’ve got good help. And it takes that to be successful at any level of competition.”

While Frost is still aiming to clinch the elusive Clarksville track championship, he’s also hoping to branch out and find victory lane at other racetracks this season.

“I know that we can run with those guys and we can compete,” Frost said. “Clarksville is 10 minutes from our shop, so financially, it makes a whole lot of sense to stay here in Clarksville and run. But our goal is to run off and try to be competitive at other tracks, not just Clarksville. “

• Winning Crate Late Model victories in companion races to Riley Hickman (above), Jamie Perry of Ringgold, Ga., won March 25-26 at Boyd’s and Cleveland, where he picked up $2,000.

• At Legendary Hilltop Speedway’s season opener, Tyler Carpenter of Parkersburg, W.Va., picked up a $2,000 victory in the Frostbuster 30 on March 25.

• Paying tribute to a seven-time track champion, Shawano (Wis.) Speedway’s April 16 season opener will have an extra $2,500 in purse money for Late Models drivers. “M.J.’s wife (Marilyn) approached us about throwing some extra money in for a night for the Late Models,” track promoter Brad Luepke said. "We plan on honoring M.J. on opening night, so we all agreed this would be a fitting week to do it.” McBride died in February at the age of 69.

• Jeremy Krouskoupf, who promoted special events at Muskingum County Speedway the past two seasons, will reopen Midway Speedway in Crooksville, Ohio, for at least five events. The June 5 Super Late Model race will pay $2,000-to-win and serve as a qualifier for June 18’s Jim Dunn Memorial at Ohio Valley Speedway.

• Long-time dirt racer Brian Fardink of Sherman, N.Y., who competed in the Limited Late Model and Late Model divisions at Eriez Speedway, died in mid-March after a brief illness. He was 36.

201 Speedway, Sitka, Ky. (April 2): The eastern Kentucky oval opens the season with the $3,000-to-win Johnny Salyer-Roger Breeding Memorial for Super Late Models. Time trials, an inverted six-car dash, heats and consolation races are on the card before the 24-car feature.

Florence Speedway, Union, Ky. (April 2): The track’s third event of the season pays $3,000-to-win for Super Late Models; an April 1 practice night has been added for all divisions.